Hello and welcome back to the second post about neighbourhoods in Seoul! Today we’ll have a look at the areas near Ewha (이대), Sinchon (신촌), and Hongdae (홍대입구), which are all neighbouring stations on subway line 2. First let’s have a look at Ewha, the area surrounding South Korea’s top women’s university. 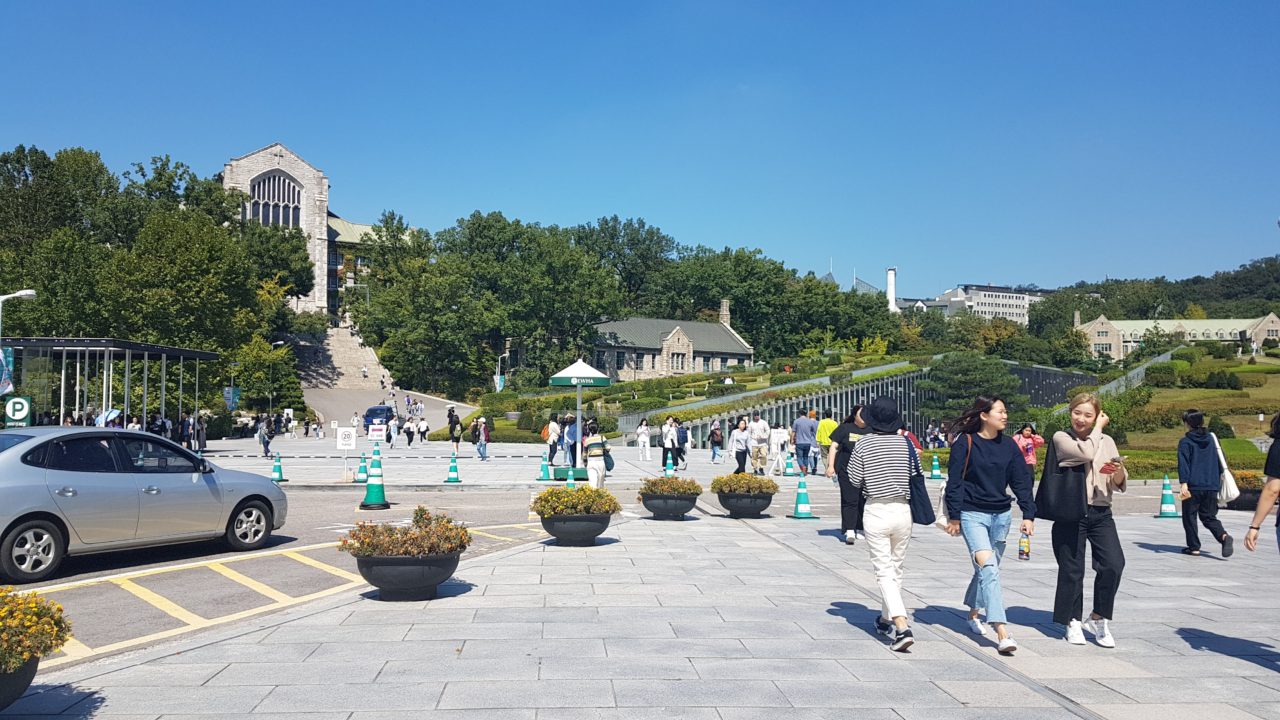 A look at Ewha Womans University campus. The building with many windows to the right is the Ewha Cultural Complex, winner of the 2008 Seoul Architecture Awards and a popular photo zone

Catering to the young crowd of female students (and the tourists, who come to take pictures at the university campus), the area is most alive from around 8AM to 7PM. Ewha is defined by various make-up stores, small coffee shops, easily affordable lunch places, and cheap clothes, shoe and jewellery stores. 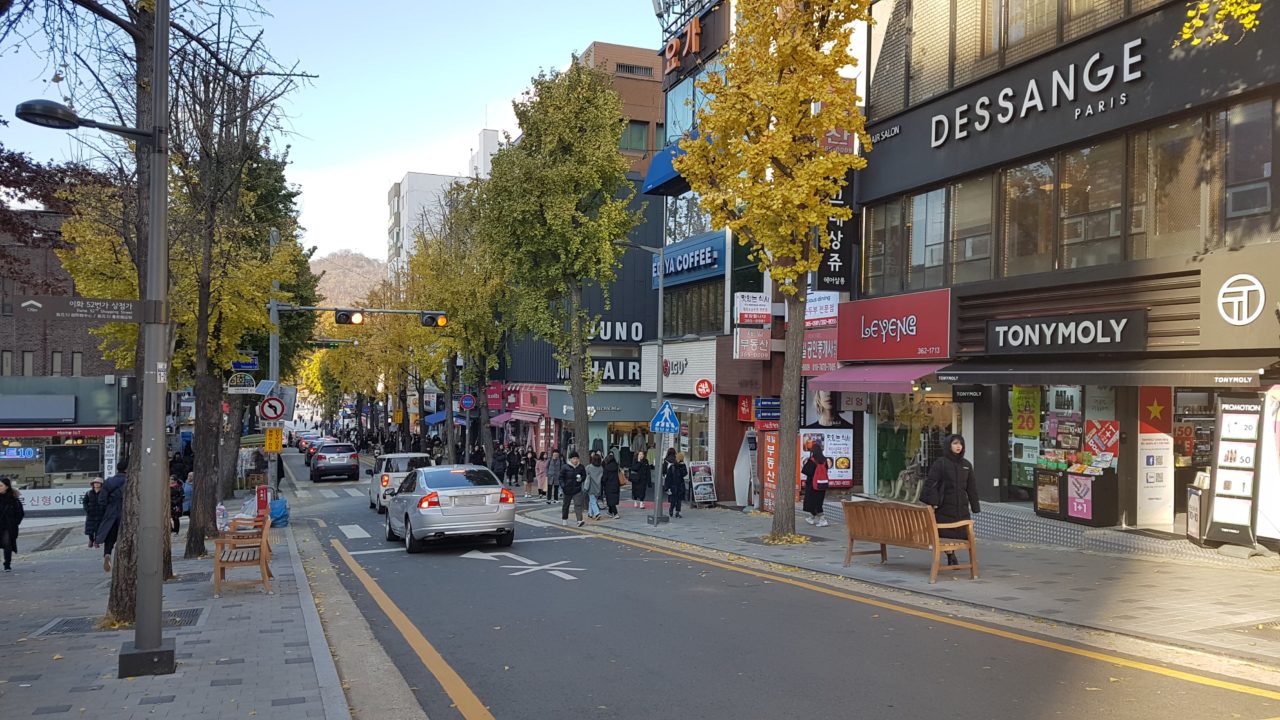 Heading from Ewha Womans University Station towards the university. This road has make-up stores, while clothes and food places are to the left

My favourite part about this area is definitely the cheap shopping opportunities! Compared to Myeongdong, which I wrote about in my last post, Ewha is much smaller and has nowhere near as many tourists. Also, if you’re interested in Korean-style fashion, this is the place for you. The brands here are mostly, if not all, Korean. 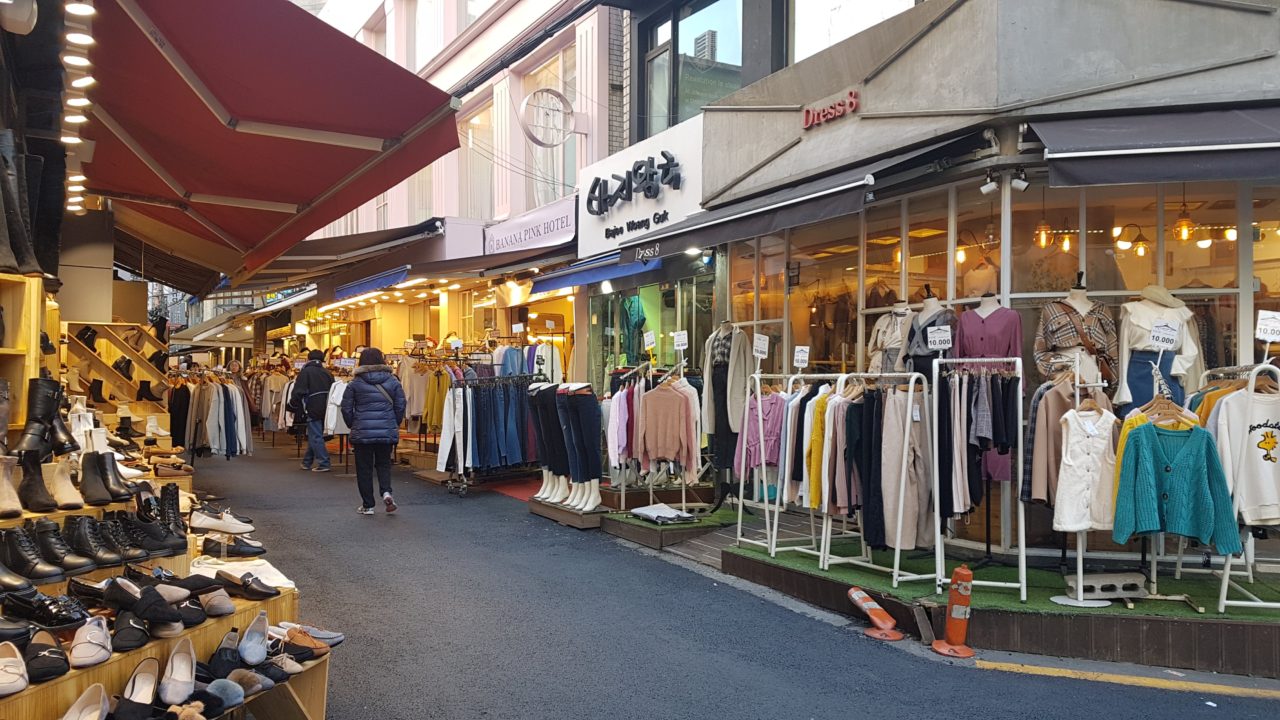 A small section of the clothes shopping street 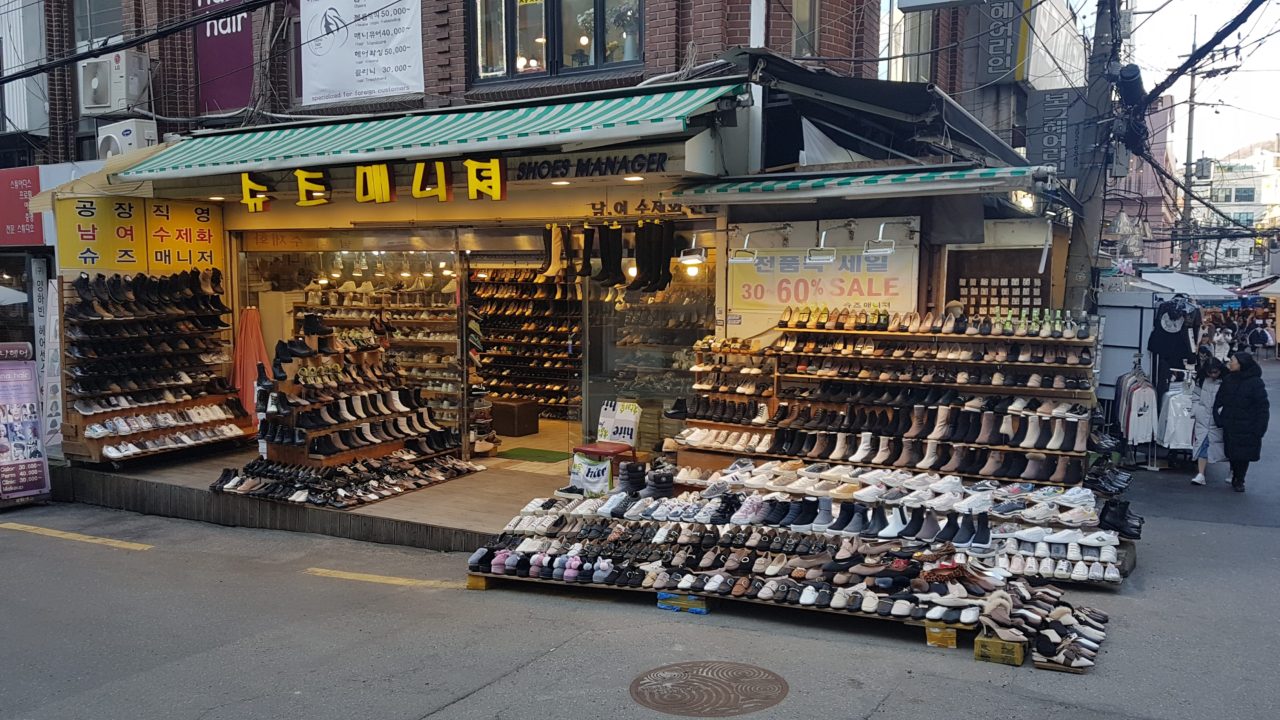 It is not just about the clothes, there are also many many shoe stores here. I bought a pair of high heeled boots from this place two years ago and they are some of my favorites still!

The many small shops are mostly focused on one street, which means you won’t have to spend a long time looking around. When my roommate and I went winter clothes hunting here last night, I found several cheap pieces of clothes in just about one hour. “Just how cheap are we talking?” you may wonder. The answer is as low as ₩5000 per piece – that’s less than $5 or around £3.

Tip: Make sure to bring cash with you. Many places with give you a discount for paying in cash and some stores don’t take cards. Also, most of the shops here will NOT let you try clothes on unless it’s a jacket or cardigan. Be aware of your body type and pay attention to the sleeve lengths and you should be able to make an educated guess on whether something will fit you or not. Lastly, if you’re looking to have gel nails done, come to Ewha! I’m unsure if it’s possible to have them done with acrylics.

Now let’s have a look at Sinchon, which is my absolute favourite neighbourhood in Seoul! Sinchon is home to Yonsei – another of South Korea’s top universities – and therefore full of students and life as well. The area I’ll focus on in this post is the street leading from Sinchon Station to the university, called Yonsei-ro. 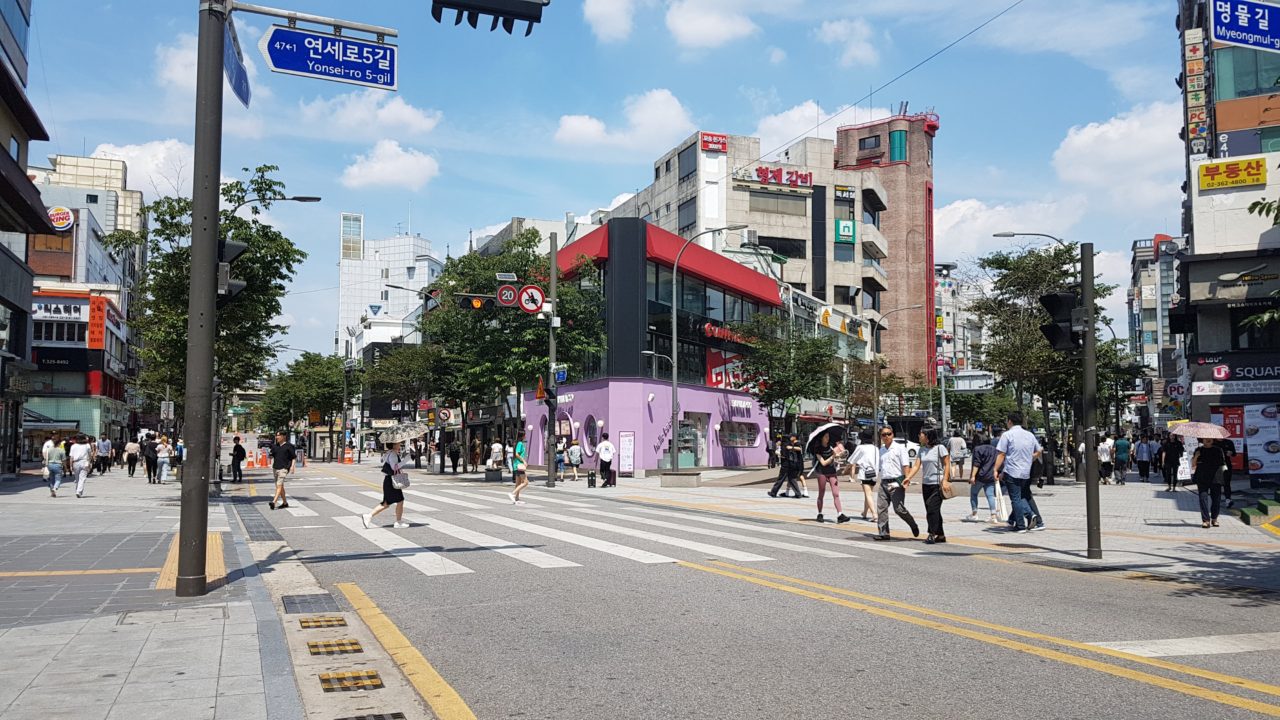 It’s a highly energetic area where something is always happening. In the weekdays, the street is bustling with students walking to and from class, enjoying food from the many cheap restaurants, or studying hard in the cafés – a number of which are open 24 hours. While I remember, allow me to introduce my favourite restaurant 아우네 분식 (the white restaurant on the right of the photo below), which is located on a street parallel to Yonsei-ro. The owners are super nice, the food is cheap, and I always leave feeling full and happy. Their side dishes are great as well! 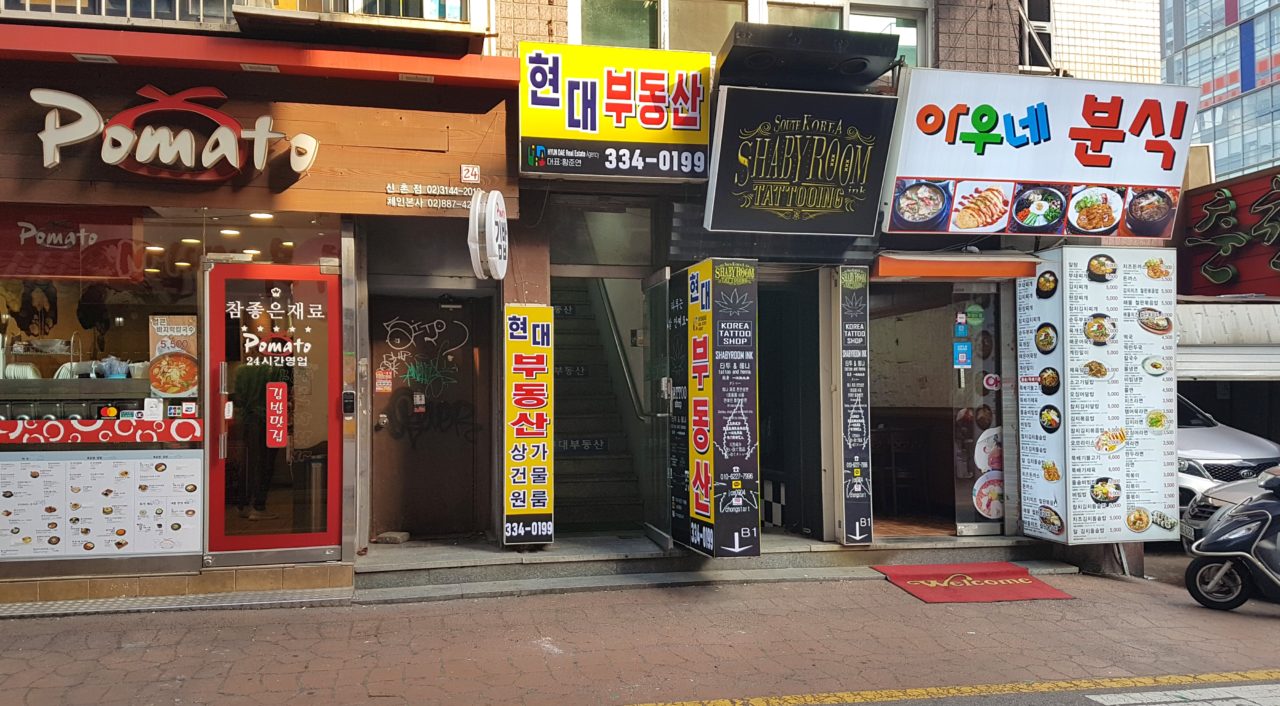 One of the best and most affordable restaurants in Sinchon is 아우네 분식 – the white restaurant on the right. I can also recommend Pomato’s food – it’s cheap as well and they have great kimbap

My Yonsei mentor showed me these four restaurants as well, located in a small street off Yonsei-ro. They are cheap and super popular places to eat but if you want to go there early in the day, you better be quick! These places are highly frequented by Yonsei students during lunch break. 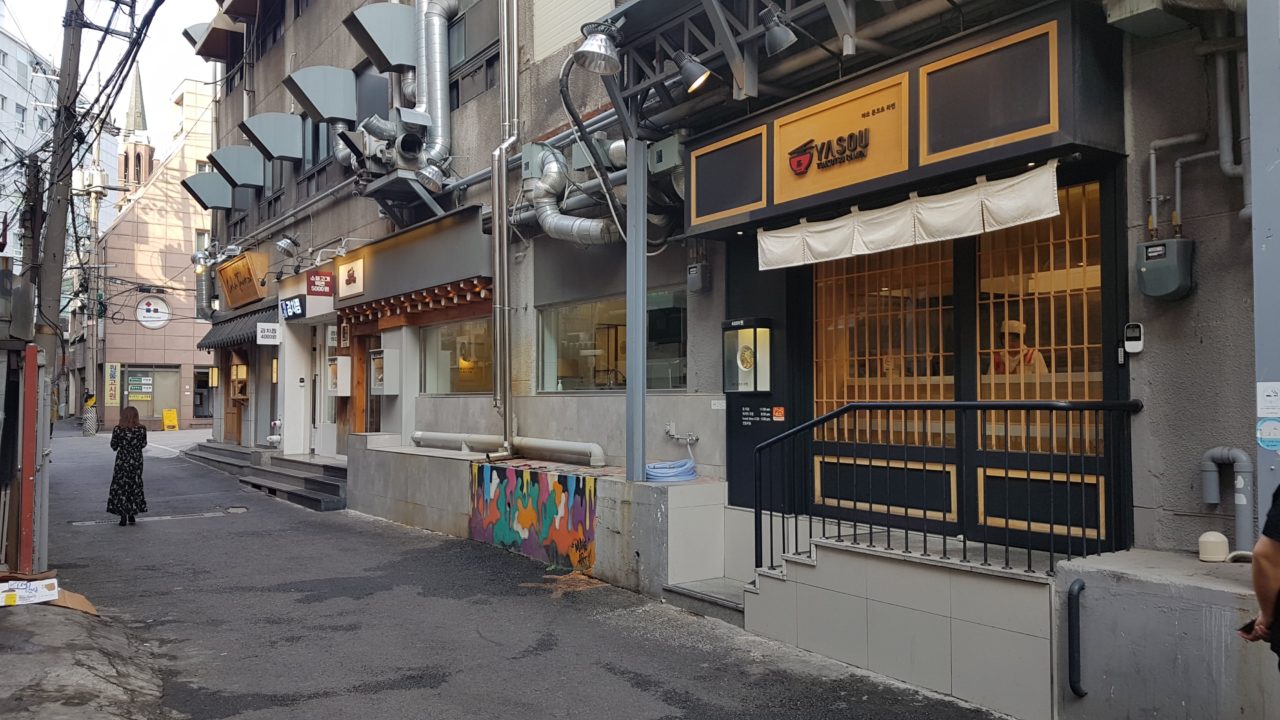 Near the station is a piano that everyone can use and many times, while returning home for the day, I’ve found myself stopping to enjoy the music of talented strangers. Speaking of music, Yonsei-ro is also home to busking both on weekday nights and weekends. It’s not just for amateurs, just two weeks ago NELL did a spontaneous performance there. 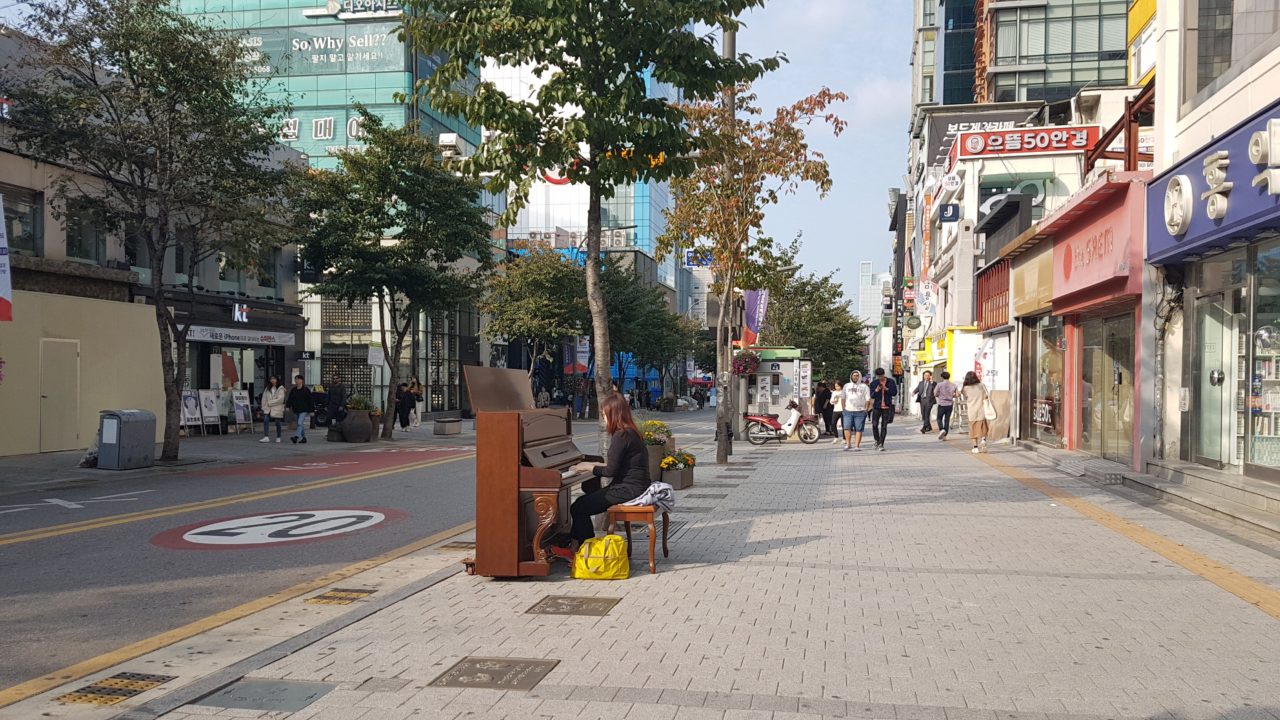 Sinchon is an area popular with musicians

It is also home to numerous festivals and markets on the weekends, which is probably what makes me love Sinchon so much. The festivals are frequent, unique, and happen all throughout the year. In summer there is a Water Gun Festival, December has the Santa Run, and as recently as last week the 119 Festival took place there. 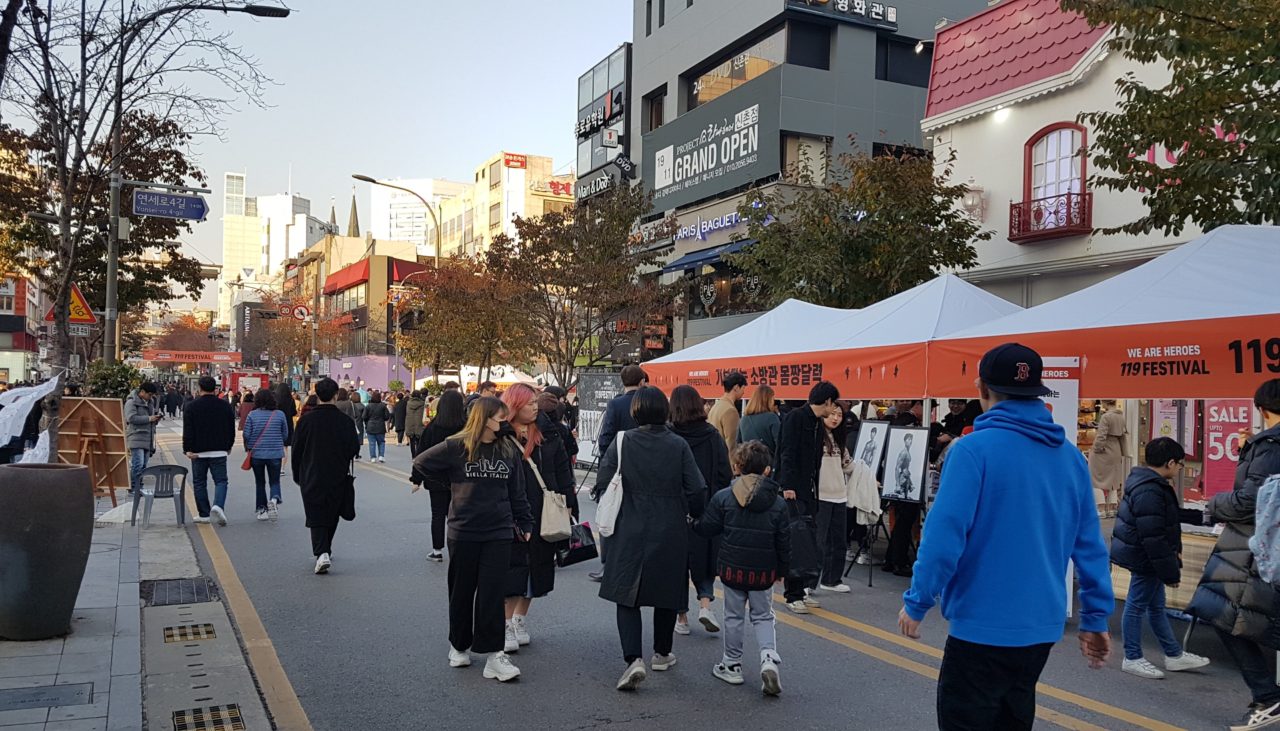 At the 119 Festival, people could learn CPR for free, play bowling with fire hoses (quite a creative idea), and buy the famous Firefighter Calendar in support of burn victims

Yonsei is “awake” until late but definitely most energetic during the day. If you want an active nightlife, let’s have a look at Hongdae next! This is the place I go for drinking, clubbing, and watching busking performances.

Hongdae is yet another area surrounding a university but it is much more quiet compared to Ewha and Sinchon – at least during the day, that is. In this way, Hongdae is kind of like Las Vegas in the way that it feels like two different places depending on what time you visit. During daytime, Hongdae is mostly asleep and some shops do not even open before 2pm. There are some make-up stores, some clothes stores, and some electronics stores but what you mostly find here are restaurants, I’d say. 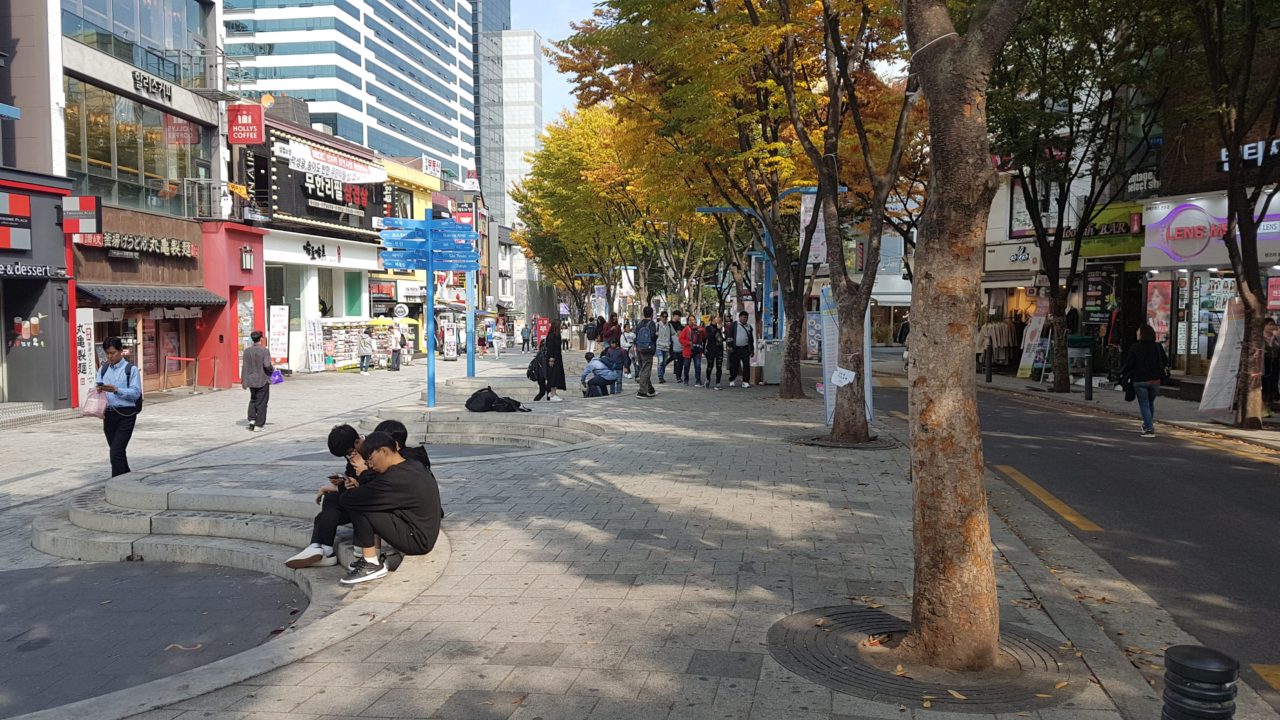 Hongdae around noon has a completely different atmosphere to Hongdae at midnight. It’s almost as if they’re two different places!

Do you see the curvy steps where the boys are sitting? Every night they turn into seats for the many people coming here to watch busking. Trust me; Sinchon is good, but if you want to watch busking, Hongdae is the place for you. There are countless of talented and hardworking people here and I have spent many nights watching them. It’s also a great place to chat to new people – especially other foreigners, since they seem to gather here in the night.

Like I said, Hongdae also has clothes. The below picture was taken during the afternoon and as you can see there were already quite a few more people than earlier.  If you walk from Hongdae Station exit 9 through the “main street” and past the performers, you’ll eventually get to area with little stores selling clothes. Like Ewha, you cannot try it on here either. The price here is higher than Ewha but still relatively cheap. If you walk even further and make a left turn, you’ll get to the street with nightclubs. 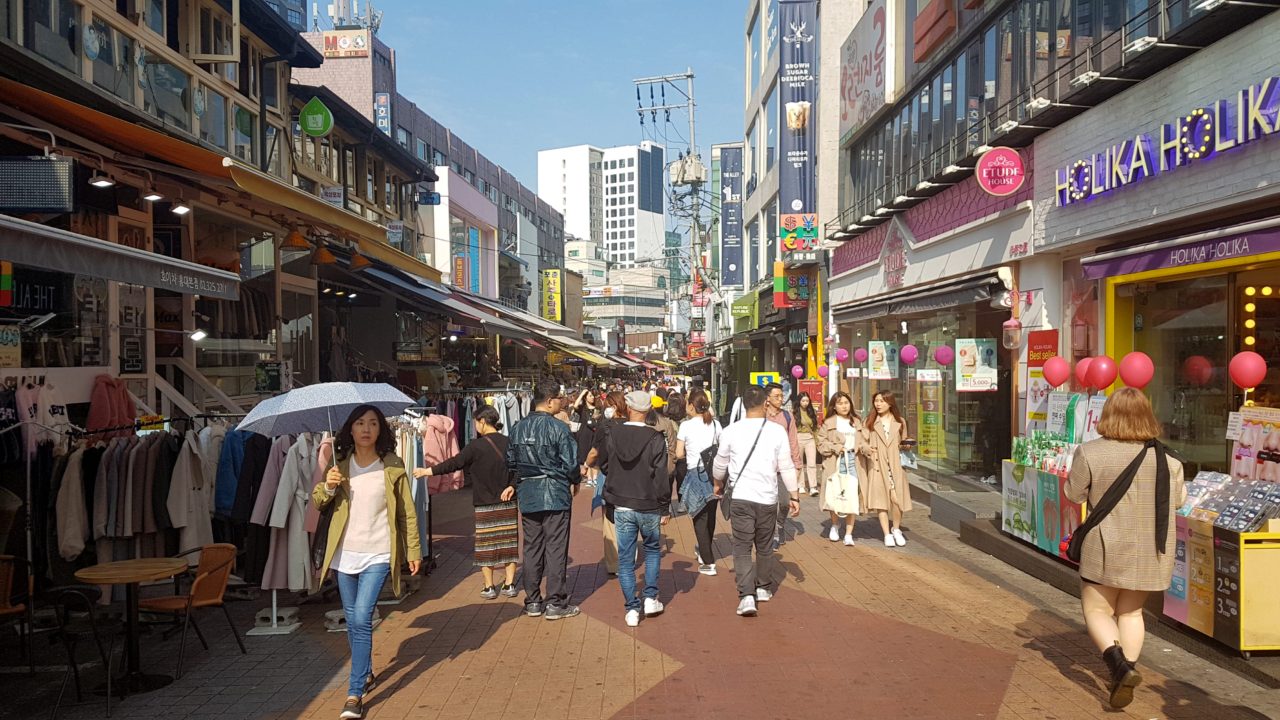 Before we get to the nightclubs, I’d like to recommend a visit to one of my favourite cafés, which is here in Hongdae. The name of it is CaffeYAM (까페얌) but I usually refer to it as the princess café because everything in there is adorable and pretty. This café has the most beautiful milkshakes I’ve ever seen and the cutest cakes! If you are into all things girly, this is a must visit! The cakes are proudly (and rightfully so) put on display near the entrance and you can choose between a variety of mermaid cakes with tails, unicorn cakes with horns, rainbow cakes, even a beauty and the beast cake as of my last visit, and more. In front of the desk is a basket with headbands that are free to use for selfie-taking purposes. 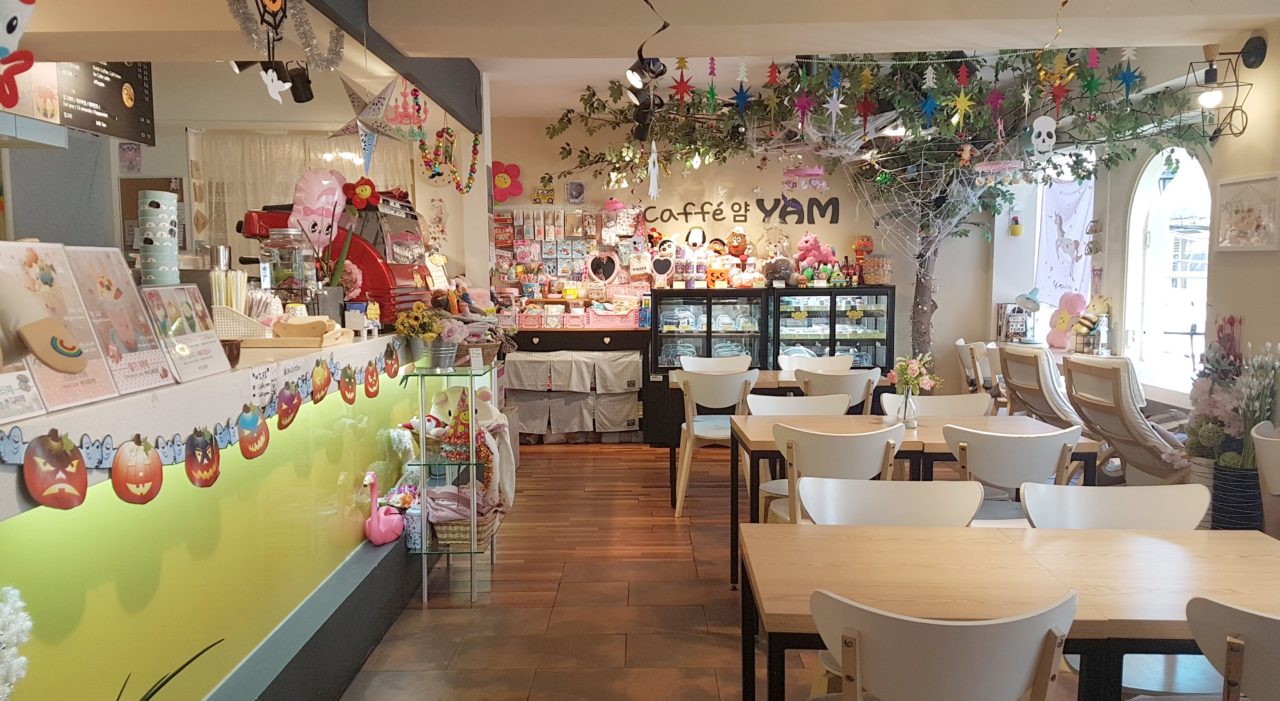 Caffe Yam – a must-visit for the prettiest cakes and milkshakes in Hongdae!

Now let’s talk clubs. The sun has gone down, the Koreans have come out, and you feel like dancing. Where do you go? That’s a good question and the answers are numerous. Hongdae has SO many clubs and I have only been to a fraction of them. Have a look around or follow the people holding signs and spreading good vibes in the street. My juniors like to party in Itaewon but I have found Hongdae to be MUCH cheaper when it comes to entrance fees. Some places are free, some offer student discounts, and some have free entrances if you stay until a certain time. 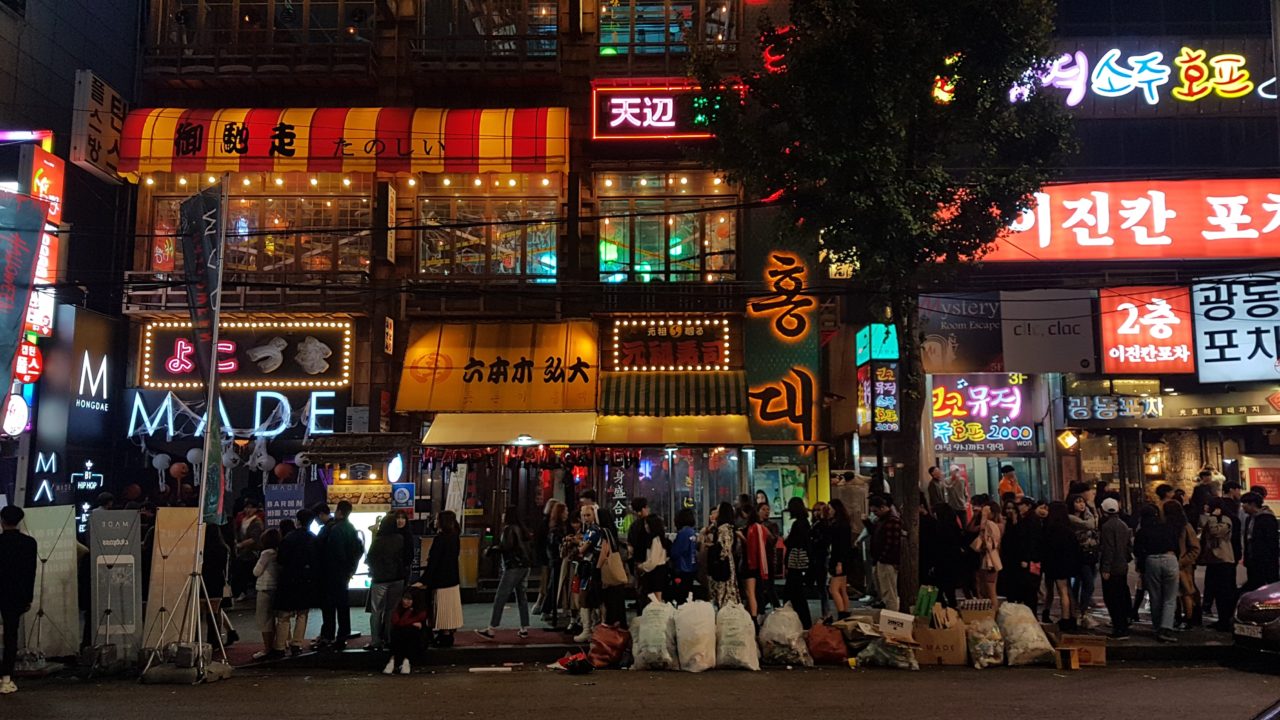 Hongdae is one of the hottest spots for nightlife in Seoul. Here people are standing in line to enter one of the area’s many clubs

This leads me to my last recommendation of the day; my new favourite club, Club G2! My friend and I went there to celebrate her 21st birthday around two weeks ago and while we hadn’t planned on staying long due to it being a Thursday and just the two of us, we ended up staying out until three in the morning. As soon as we entered, a guy working there came over and handed us giant colour changing glow sticks made out of foam, a female worker walked around handing out free vodka to people, and later in the night they lit up sparklers. The music was a nice mix between American and Korean music and all in all it was a fun experience. Go if you get the chance!