Introducing a small miniseries about neighbourhoods in Seoul!

When planning trips to Seoul, quite a few of my friends have asked me where to stay and what to do. I always tell them that it depends on what they want to see because there are so many different places to go. Gangnam is fancy, Sinchon is student friendly, Hongdae has nightlife etc. This mini series is meant to be a bunch of short introductions of neighbourhoods that I believe will be worth visiting. For the sake of simplicity, I’ll be dividing focus areas into their nearby subway stations.

In this first post I want to tell you about Myeongdong (명동역, subway line 4 ) and Dongdaemun History & Culture Park (동대문역사문화공원역, subway line 2/4/5).

Let’s start with Dongdaemun History & Culture Park! At this station you will find the Dongdaemun Design Plaza, also called the DDP (subway exit 1), which is an incredible, curvy architectural structure and home to conventions, art exhibitions, trade shows, design markets, and, most recently, Seoul Fashion Week!

On a normal day you will find tourists here but not at all in masses compared to other places. Surrounded by huge malls and busy streets, the DDP is a great place to take a breather with its many green areas and exhibitions where you can really let your thoughts and imagination flow. In the midst of this futuristic building, you will also find remains from the last Korean Dynasty and the Japanese Empire, making this a perfect example of “old meets new.” Also don’t forget the outside LED rose garden, which is hugely popular to tourists and locals alike! There are also little food stands in case you want to grab a quick snack.

Outside the DDP, along the street, you’ll find small markets every Saturday. When I was there this past weekend, I saw one section selling mostly clothes and one section with a sign saying “얼굴 있는 농부 시장,” which loosely translates to a local farmers’ market where you get to meet the farmers in person. Little signs highlighted how everything was made using only natural ingredients and the sellers were more than happy to me let take pictures and have little taste samples. A young guy at a stand selling jams let me taste chocolate jam, pineapple jam, Earl Grey jam (popular with girls), and black sesame seed jam (popular with guys), while telling how it was made. For example, one whole blended pineapple was used for just one jar of jam. 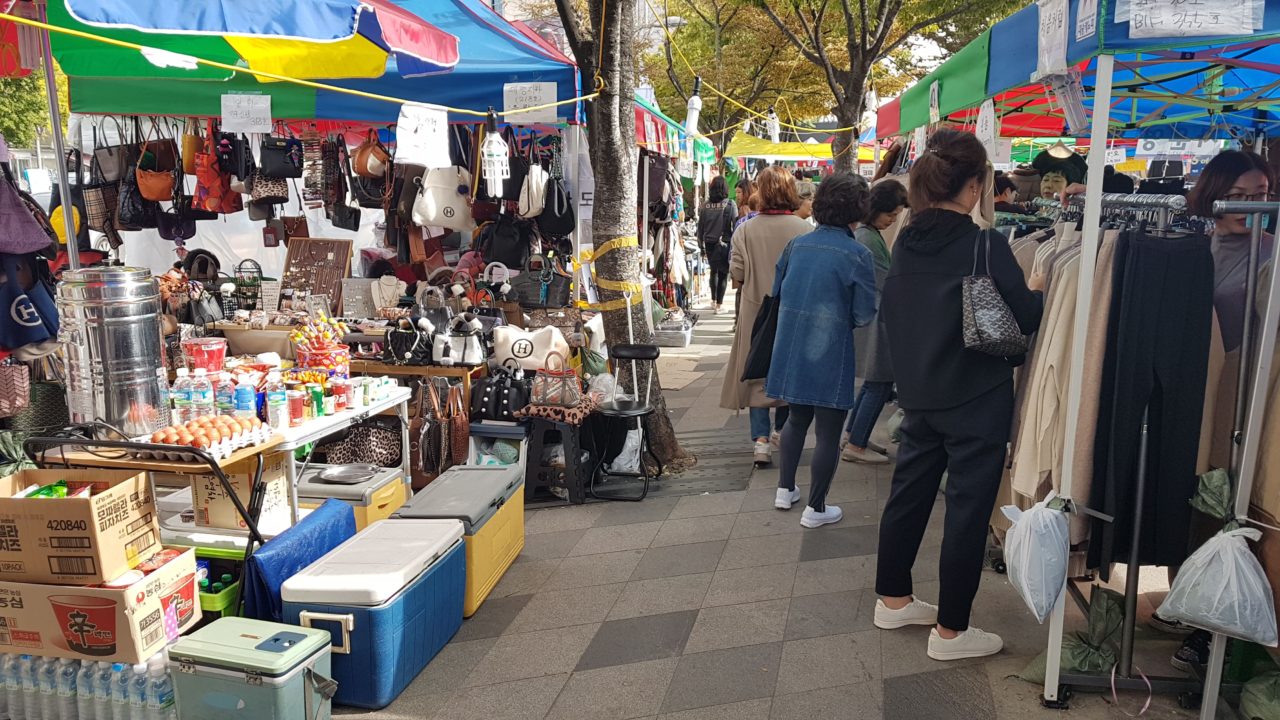 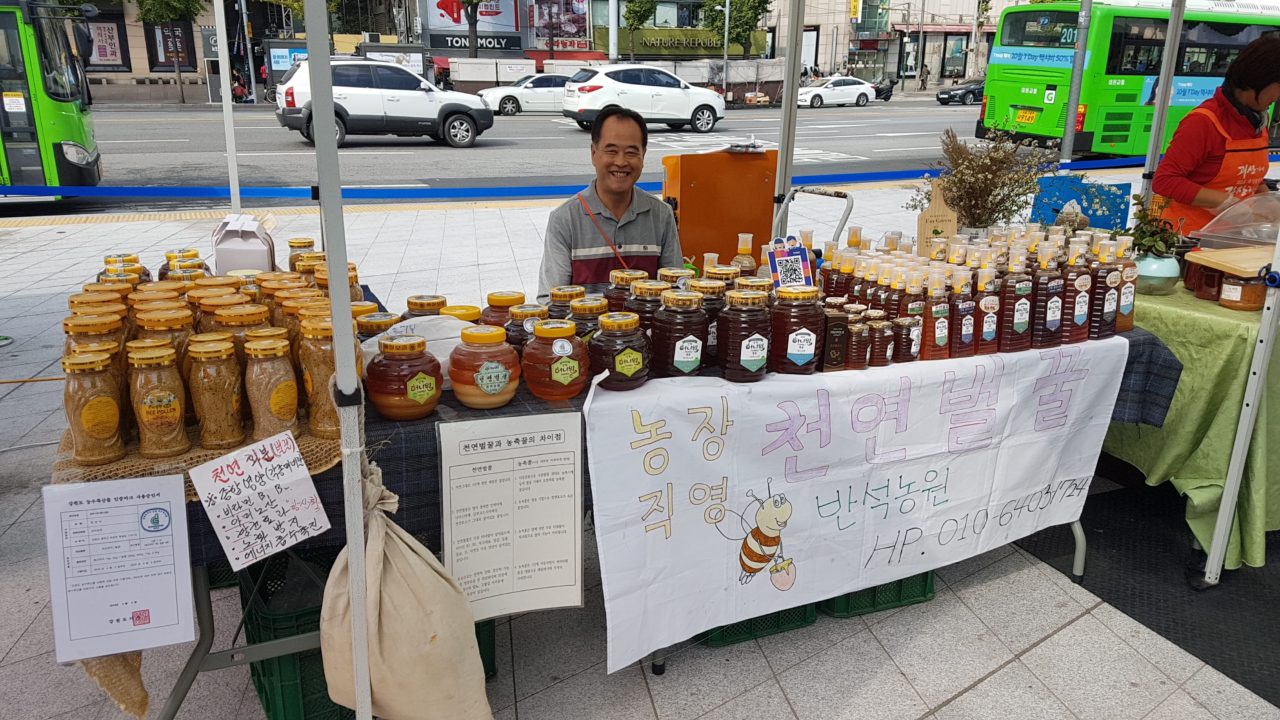 And here you see the farmers’ market. This man was so proud when I asked to take a picture for this post!

The area features many BIG malls with hundreds of stores selling clothes, fabrics, food, electronics, etc. in a wide price range. I can recommend checking out the Doota Mall right across the road from the DDP even if just for window shopping. Stop by the food court for a break and continue your adventures in this shopping mecca.

Like I mentioned above, I was in the Dongdaemun area during fashion week. It was only my third time visiting the DPP since I was unaware of the market and since art exhibitions usually are outside my interest areas. However, during the fashion week, the DDP turned into my favorite place to be! It was simply bustling with life. Celebrities, pro- and amateur photographers alike, models and aspiring models, designers, and those with interest in fashion were all gathered here. For a week, the DDP was one of the hottest places to be in Seoul. I’d like to get more into this event in another post about festivals and events here in Seoul so I’ll spare you the details for now. I will say this though: if you happen to be in Seoul in March or October, do yourself the favor and drop by just one day to experience this.

Now let’s move on to Myeongdong, which is just two stations away from Dongdaemun History & Culture Park. 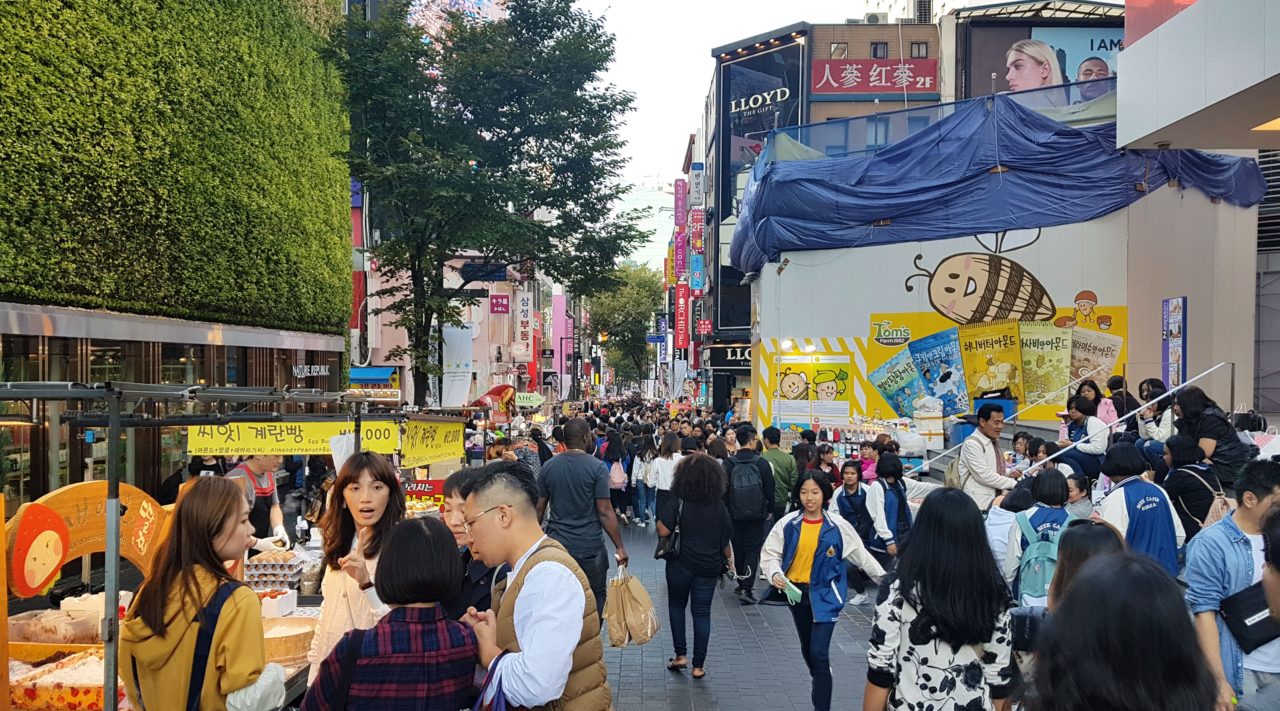 Myeongdong is one of the top shopping destinations in Seoul

If you want to go shopping, Myeongdong shopping street (exit 6) is the first place that comes to mind. Unlike Dongdaemun, there are MANY people here almost any time of the day so if you want to avoid the masses as much as possible, I’d suggest you go early, preferably before 3pm. Other than people, the streets of Myeongdong are filled with beauty stores, clothing stores, street food stands, restaurants, and people handing out flyers about everything ranging from restaurants to animals cafés to massage parlors. There are a lot of cat and dog cafés in this area, if that interests you.

Myeongdong has everything and that everything seems to always be on sale, especially in the beauty stores. Three out of four places will give you a free face mask or something similar for just stepping into the store in hopes you’ll find something you’ll like – but be warned, the sellers are much more pushy in Myeongdong stores than anywhere else I’ve gone here. Keep this in mind and you’ll be fine. If you’re looking for more western style clothing, Myeongdong offers stores such as H&M, FOREVER21, and ZARA as well.

Now let’s talk about food! The street food stands open in the afternoon around 4.30-5pm when the streets start to get more busy. You can find so many interesting foods to try here and I’ve never felt like I had to think twice before trusting the quality of the food. You can have chicken skewers, tornado potatoes, waffles, smoothies, fried squid, egg breads – you name it! While my Korean friends have told me that the price level here in general is a bit higher compared to places like Namdaemun market, I’ve found Myeongdong’s street food to have one of the largest ranges in variety. It’s definitely worth the money! 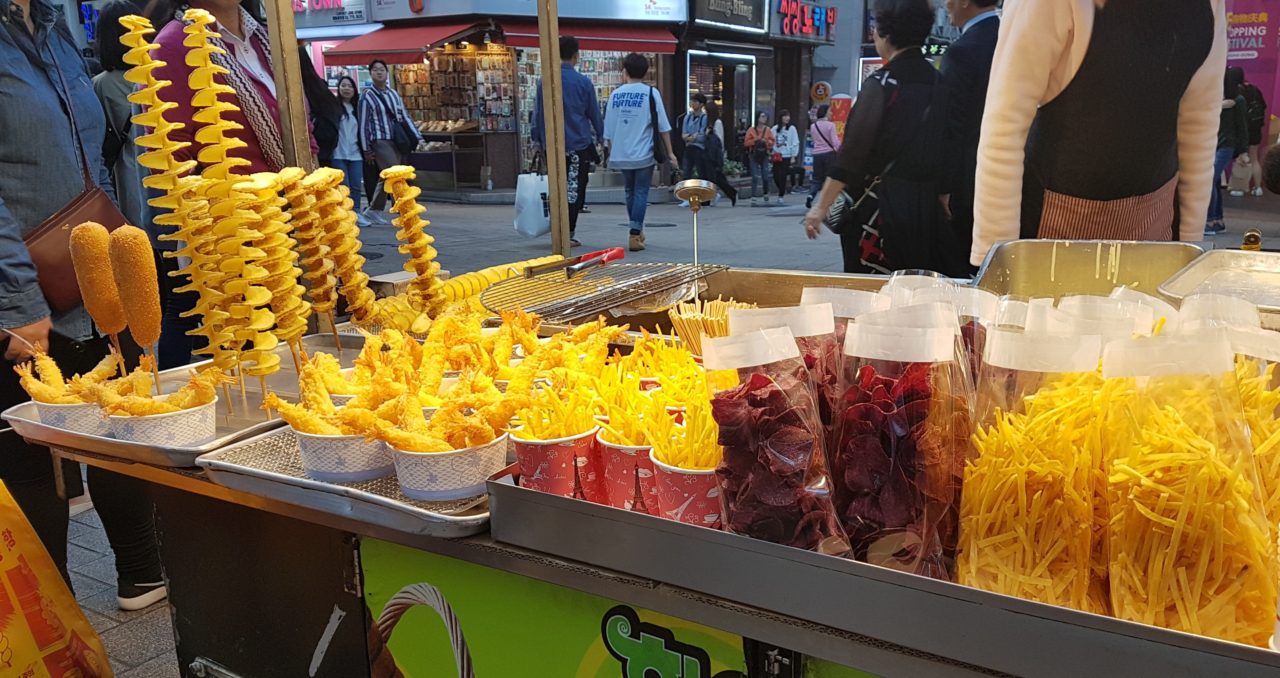 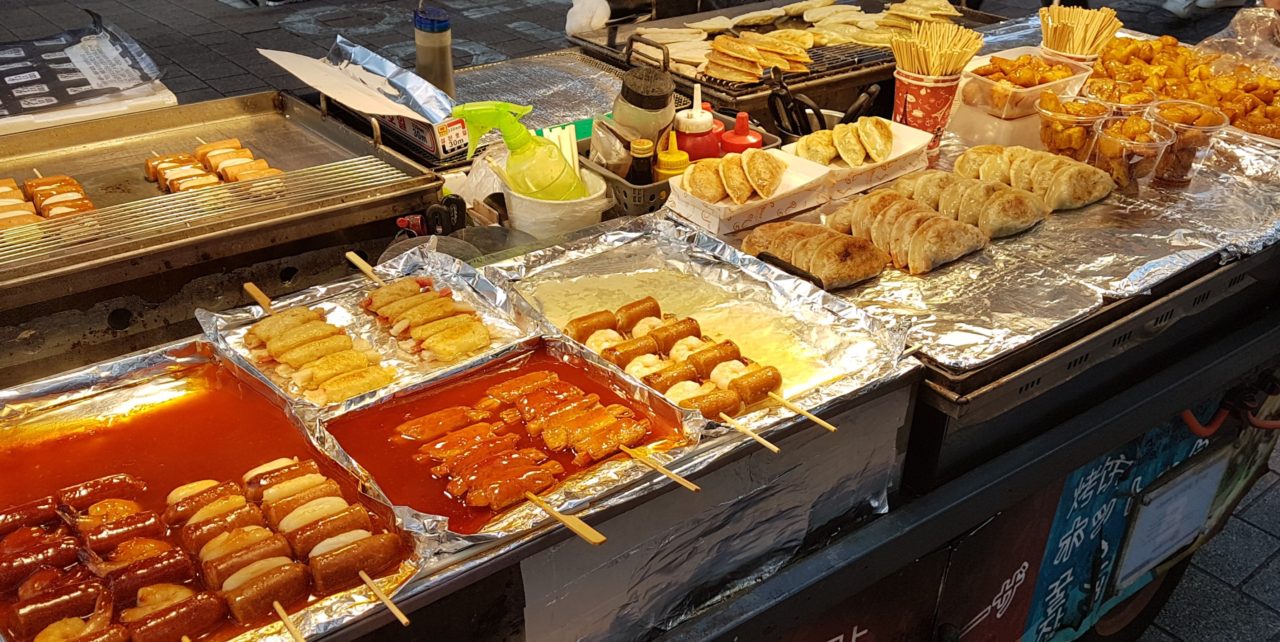 Myeongdong is a great place to sample Korean street food 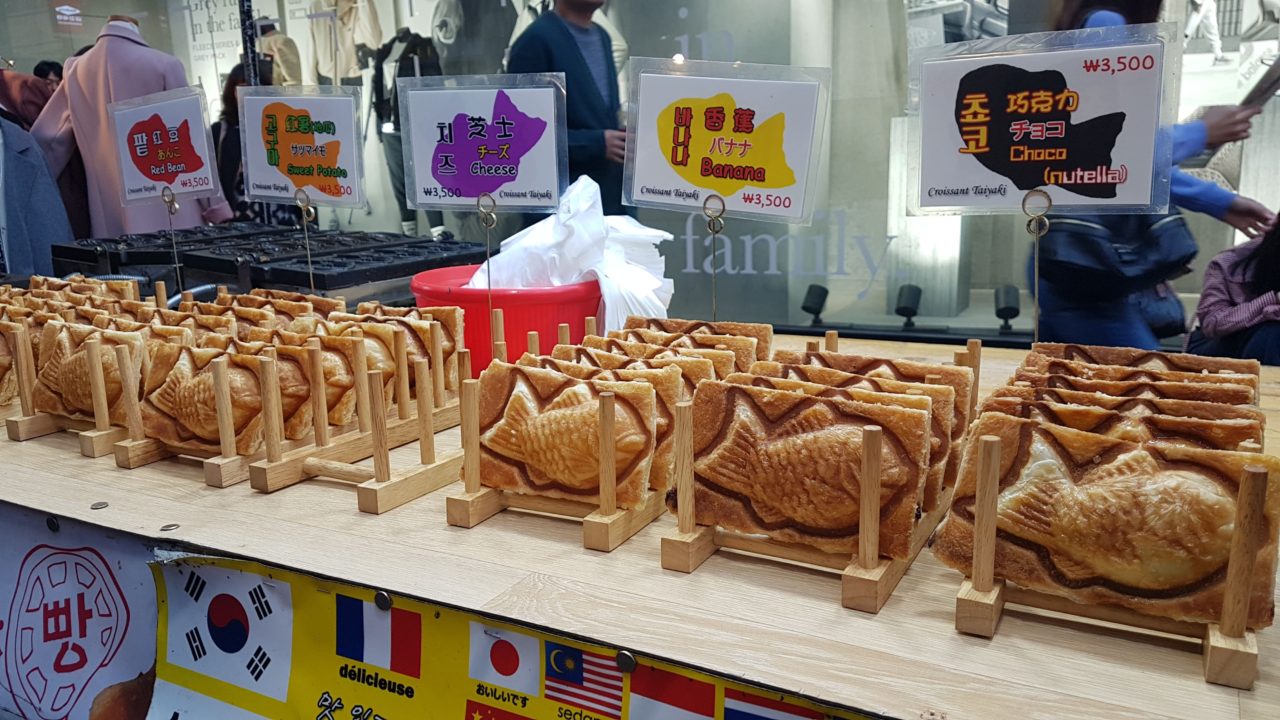 Bungeo-ppang, one of Korea’s most beloved winter street foods – a fish-shaped pastry stuffed with various fillings, the most common of which is red bean paste

After a day of shopping, why not finish by taking a trip up to the N Seoul Tower (N서울타워), commonly referred to as the Namsan Tower, that overlooks Seoul?

You can either walk your way to the top of the mountain that the tower is located or ride the cable car. (If you decide to walk, don’t worry. It’s just a steep road and some stairs. You won’t have to bring out your hiking gear). It’s an absolutely beautiful view from up there but make sure the check the weather beforehand. You wouldn’t want cloudy weather to ruin the experience, which happened to me friends and I the first time we went there. 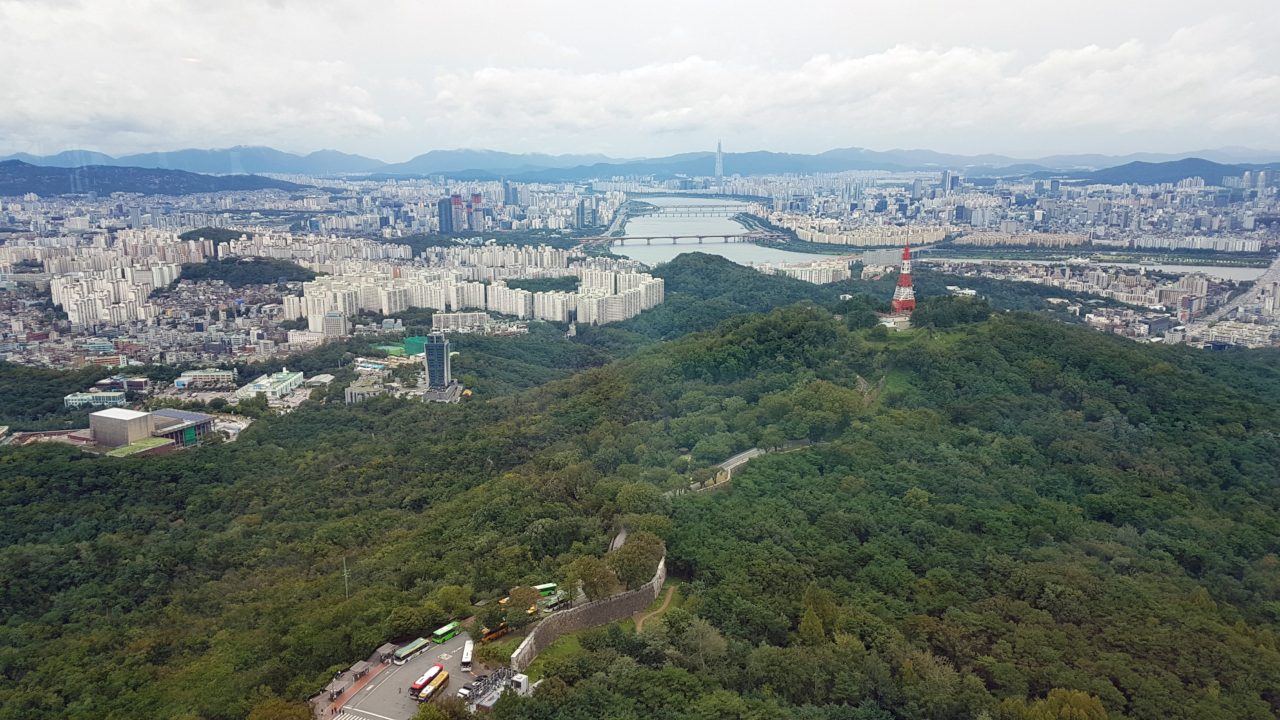 The view from N Seoul Tower – still looking great, even on a slightly cloudy day!

One thing I regret not doing when my best friend and I visited Myeongdong a few weeks ago was to bring her to watch a Nanta performance. Nanta is unlike anything I have ever seen and I found it hysterically funny! It’s an almost non-verbal performance involving drumming, knife play (don’t worry, it’s appropriate for all ages), dancing, and slapstick comedy. I HIGHLY recommend going. Sit as close to the stage as possible if you want the chance to become part of the show or enjoy it from a distance in the back. Sitting in the back, I was highly satisfied as well. You can buy tickets at the location or directly from Nanta’s website.

My last recommendation for this area is a cocktail bar that I went to recently. Who would have ever thought of building a ball pit pool on the 5th floor of a building and then filling it with giant teddy bears? The owner of Urban Space did! Not only is the pool super cool, the drinks are beautiful and creative, the walls are covered in pink, and there are areas set up specifically for the purpose of taking cute Instagram-worthy pictures. Gather your friends, dress up nice, and drop by this place! 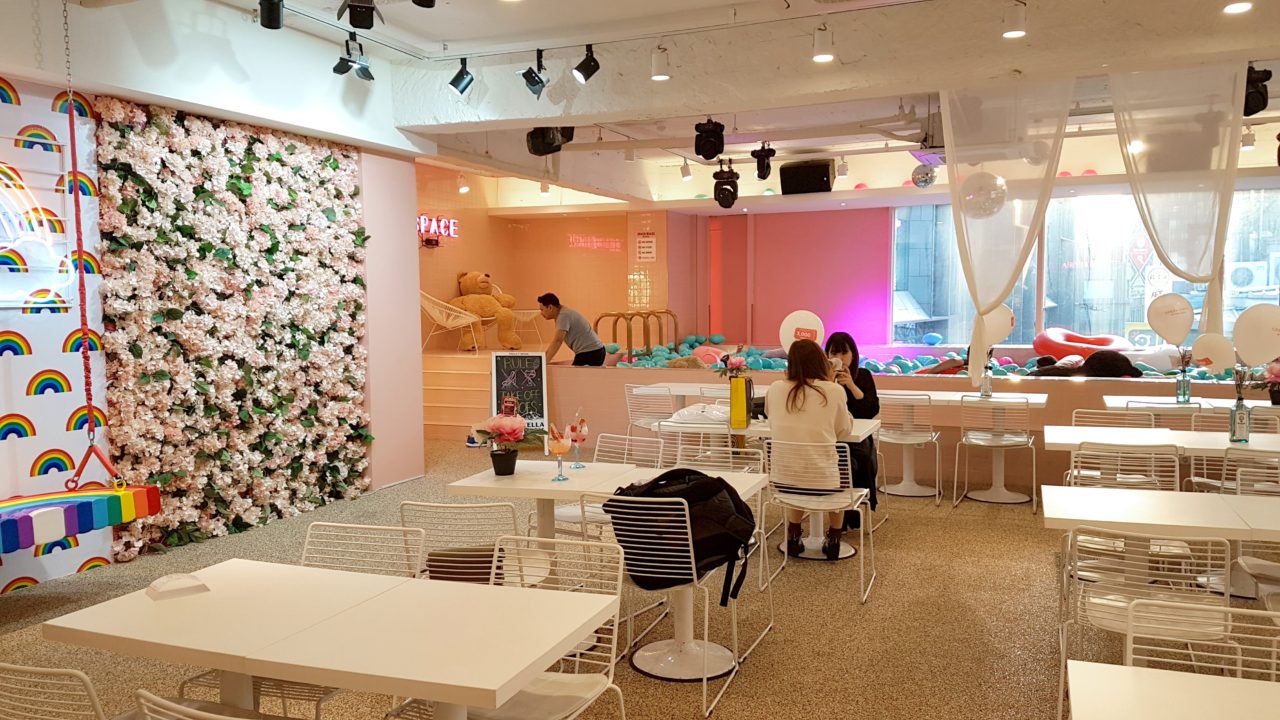 Urban Space – one of Seoul’s most Instagrammable cafes