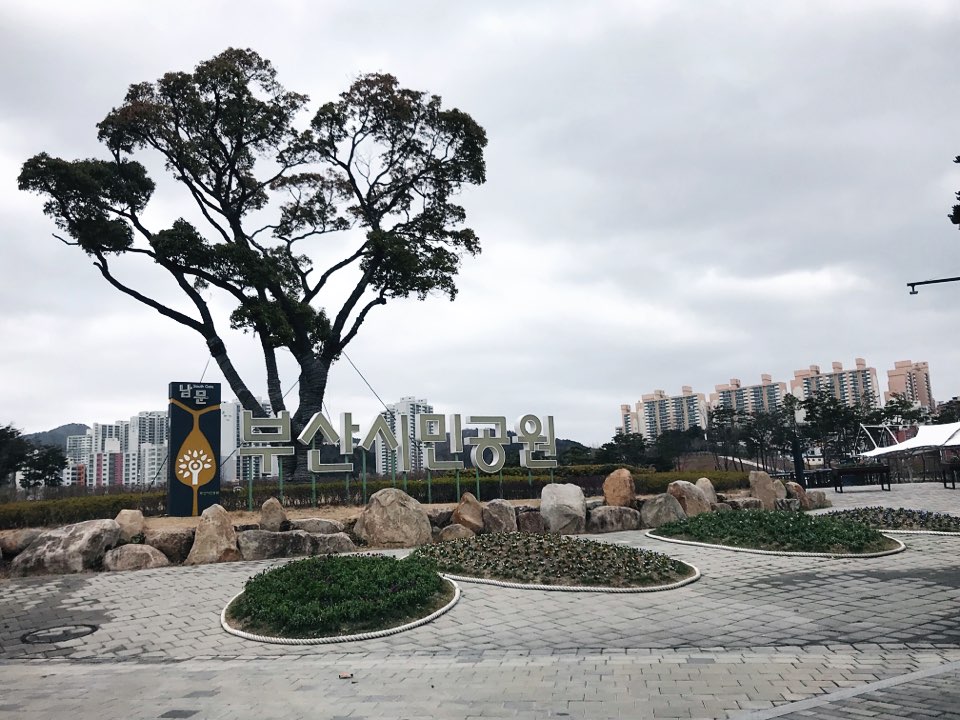 This week, my friend and I took advantage of the only nice day and we went to explore Busan Citizen’s Park. The park is one of Busan’s largest public parks with 97 different species of trees and includes 2 streams. The park is located a 5-minute walk from Bujeon Station exit 7. The park itself is actually a lot bigger than it looks and took us a good few hours to see everything! 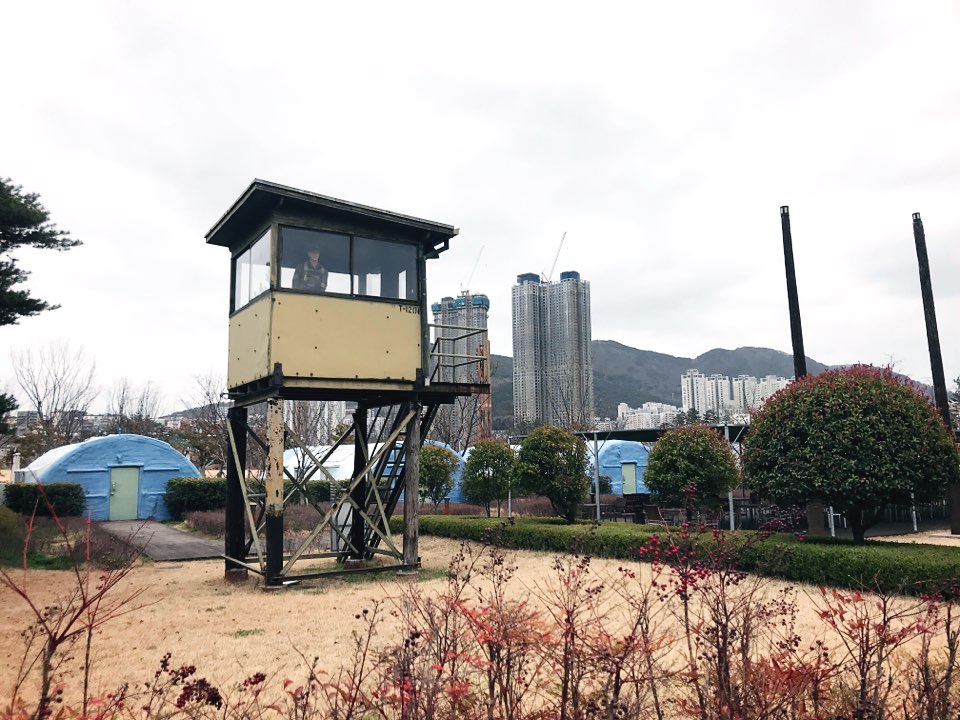 The park itself was a former Imperial Japanese Army base and United States Army camp which was given back to the city of Busan in 2006 and later redeveloped into the park we know today, and there is evidence of this all over the park. Lots of the buildings in the park are old Army buildings that have been repurposed into coffee shops, cultural experience halls and many other things. When walking round the park you will see signs outside each “area” written in both English and Korean so I suggest taking your time and reading up on the history! 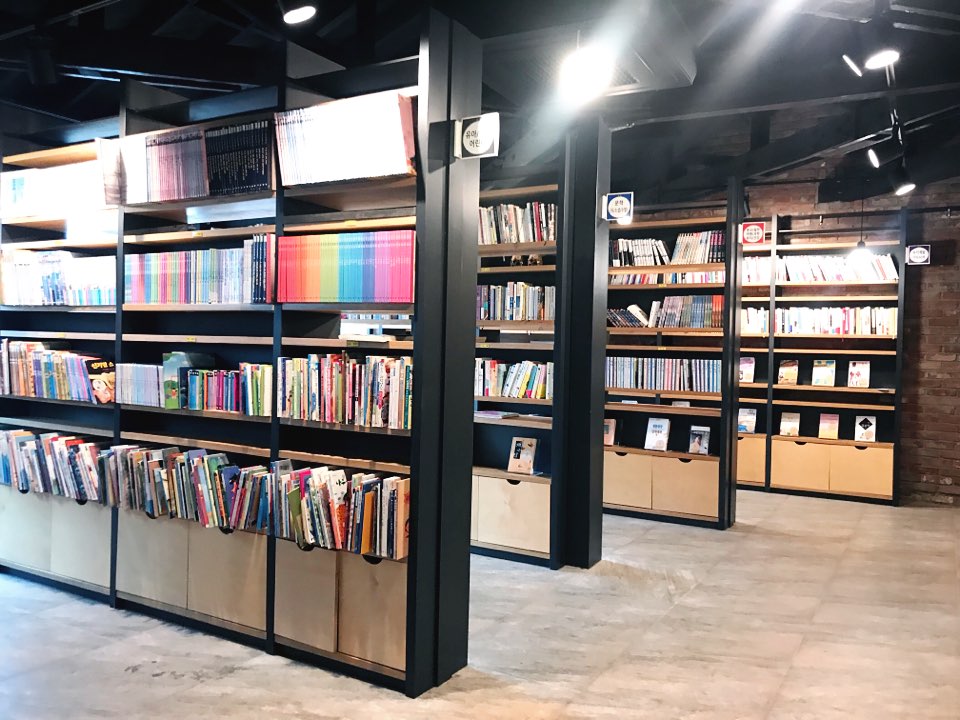 At the back of the park there is a small café. We took shelter from the wind for a while and found out that not only does the café sell amazing coffee/food, it is also part library! Whilst most of the books here are written in Korean, I still suggest checking it out if you need a break from the weather. 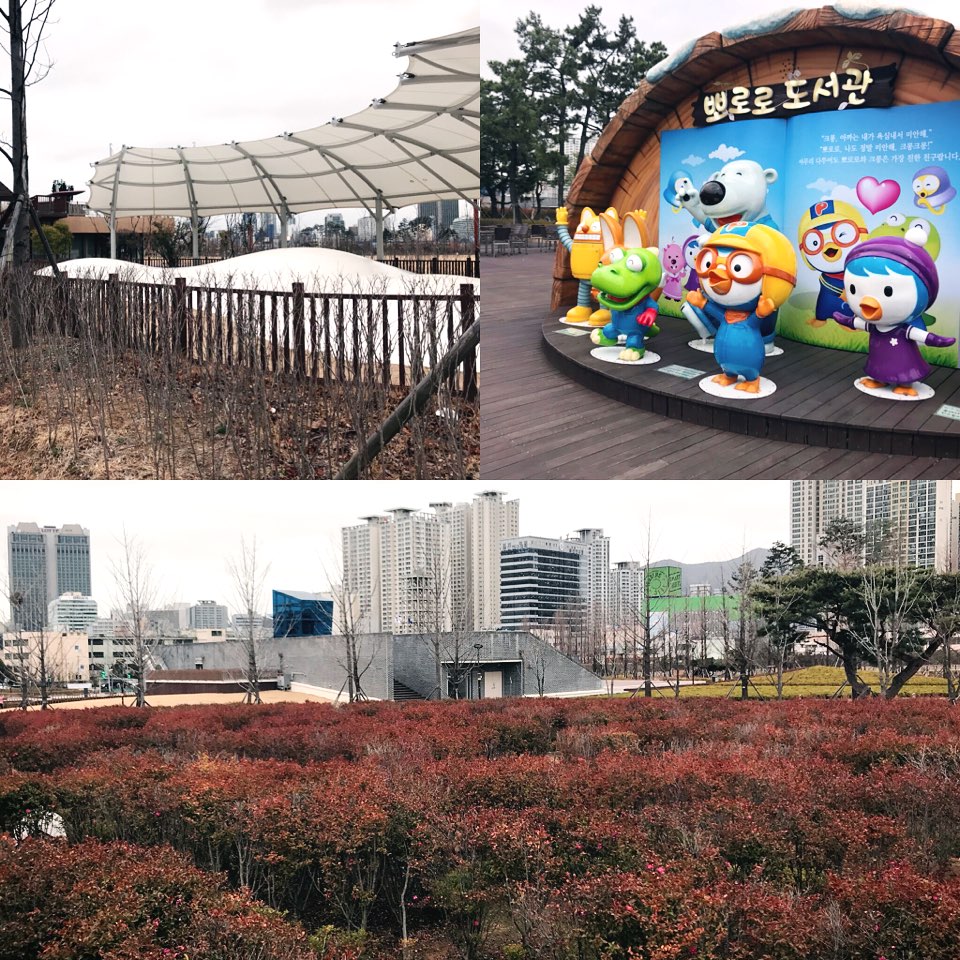 Busan Citizen Park is also a great place for children, so don’t be afraid to go if you have kids! Scattered around the park are various outdoor playgrounds (I think we walked past at least 3 and all of them looked suitable for all ages of children!) There is also a maze near the entrance (that admittedly took me and my friend longer than it should to solve.) Near the maze is the Pororo Centre – a hall dedicated to Korea’s favourite penguin character. We also walked past something called the “Air Bounce”, from the small conversation I had with the park ranger I understand it to be similar to an outdoor trampoline for kids. 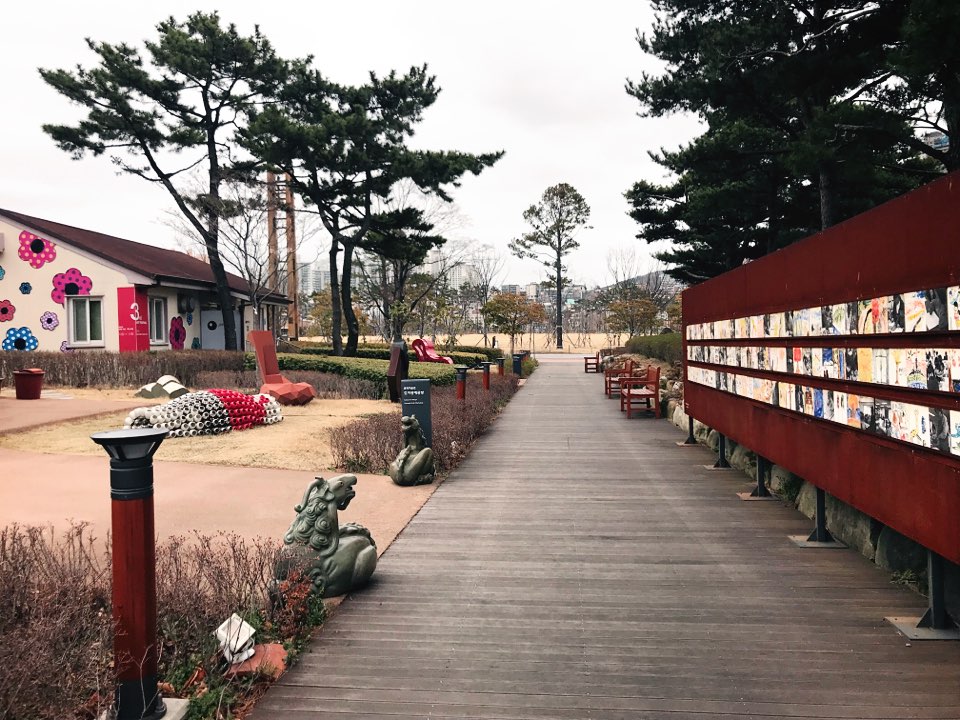 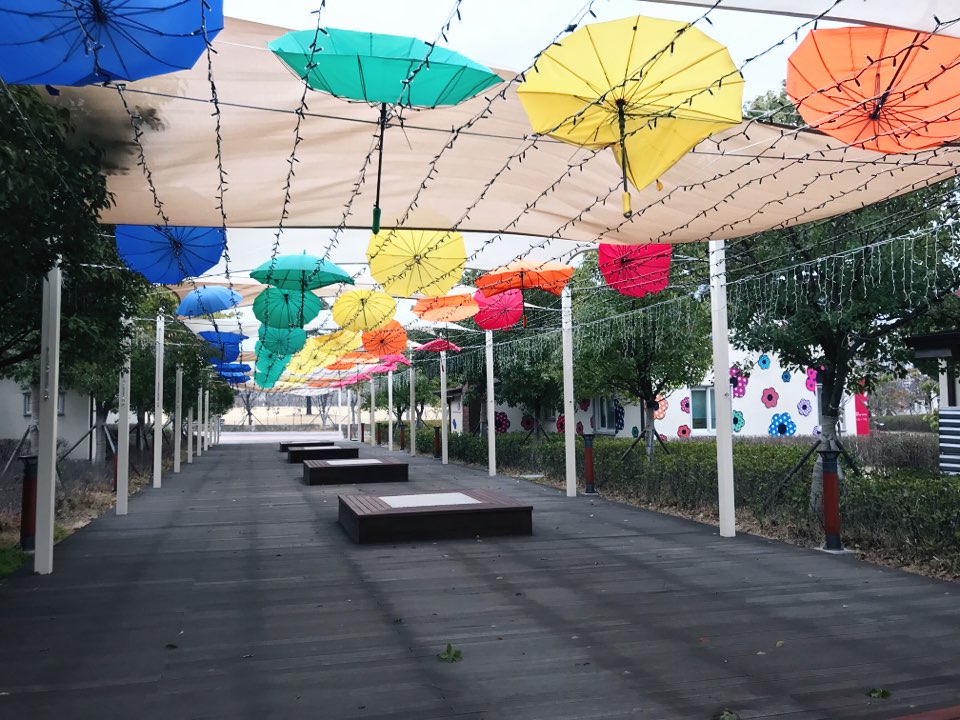 Near the main entrance to the park you will find the cultural section. Here there are various buildings with different activities in each. There is a building for printmaking and various other arts that are available to try out! There are also a few art installations near this area made by local artists and some community projects based on the history of the city. In this area there is also a stage area which we were told hold local concerts, plays and other cultural events during the warmer months. 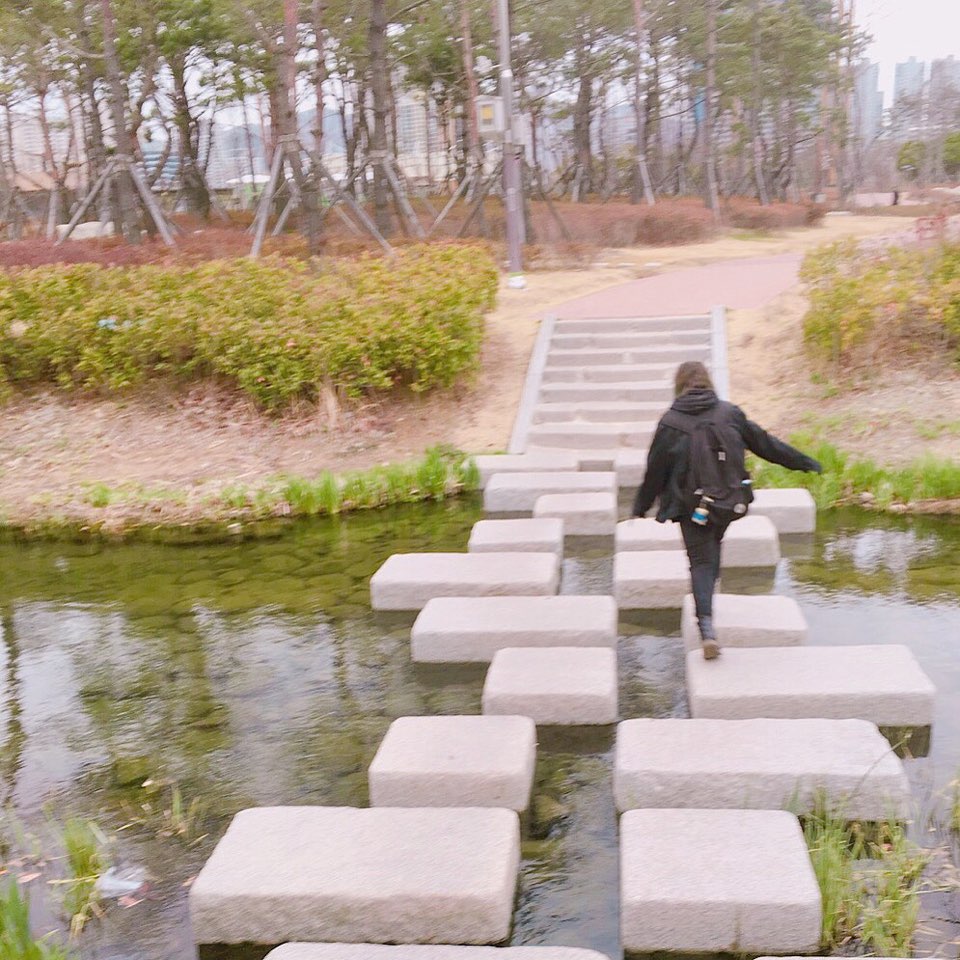 One of the main attractions of the park is the waterfall and fountain at the main entrance. Unfortunately, due to the weather or the time of year we were unable to see it. We were however, able to see the streams that run though the park. One of which was very reminiscent of the Cheonggyecheon stream that runs through Seoul – perfect for an Instagram photo. 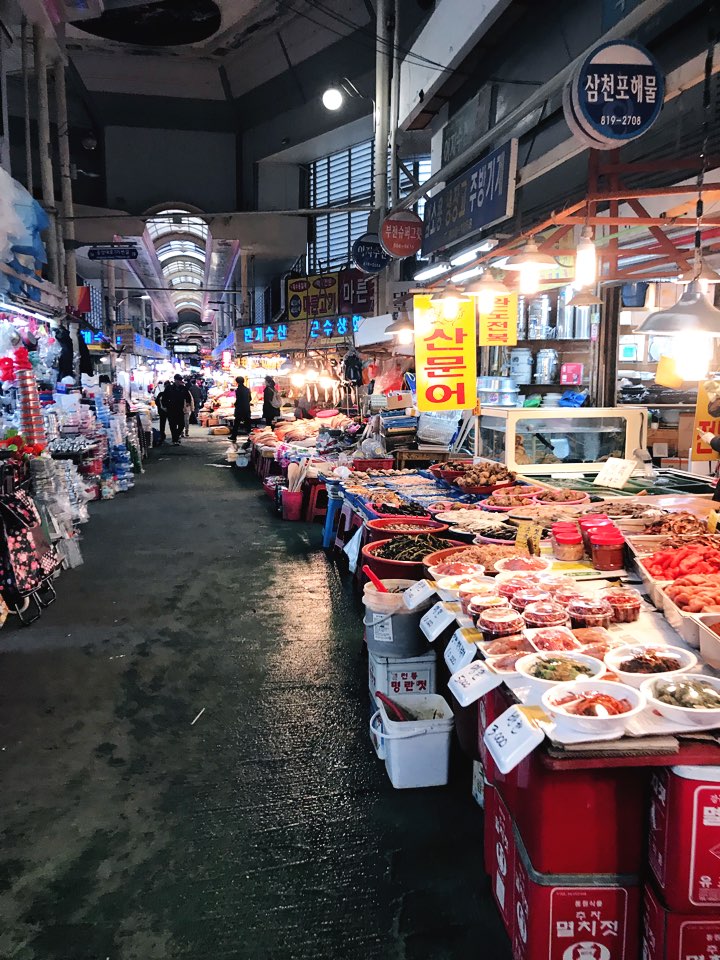 After spending the day in the park I highly suggest looking round the area. The area itself is known for having some of the most authentic Korean food you can find! If you’re feeling really adventurous, outside Bujeon station is the Bujeon market and it is an experience you won’t want to miss! Full of vendors selling everything from household goods to live seafood, you can find absolutely everything here. The woman running the stalls are nothing but kind and will encourage you to try some of whatever food the happen to be selling. If street food isn’t your thing, it’s still and interesting place to explore!