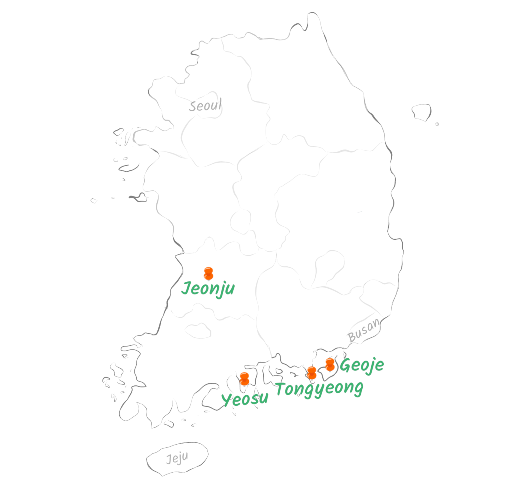 a greater sense of each of the places we visited and hopefully provide some insights into each destination and worthwhile things to do there. In this week’s post, I’ll be covering our journey from Jeonju to Yeosu, Tongyeong, and Geoje on our way to Busan.

We kicked off our travels around the mainland by flying into Gunsan and then catching an hour-long bus to Jeonju. Situated in North Jeolla province, a region famed for its food, many believe that some of the best food in South Korea can be found in Jeonju. Therefore, hungry after the travels, we made straight to find some of Jeonju’s famous Bibimbap (rice with mixed vegetables and spicy red pepper sauce). 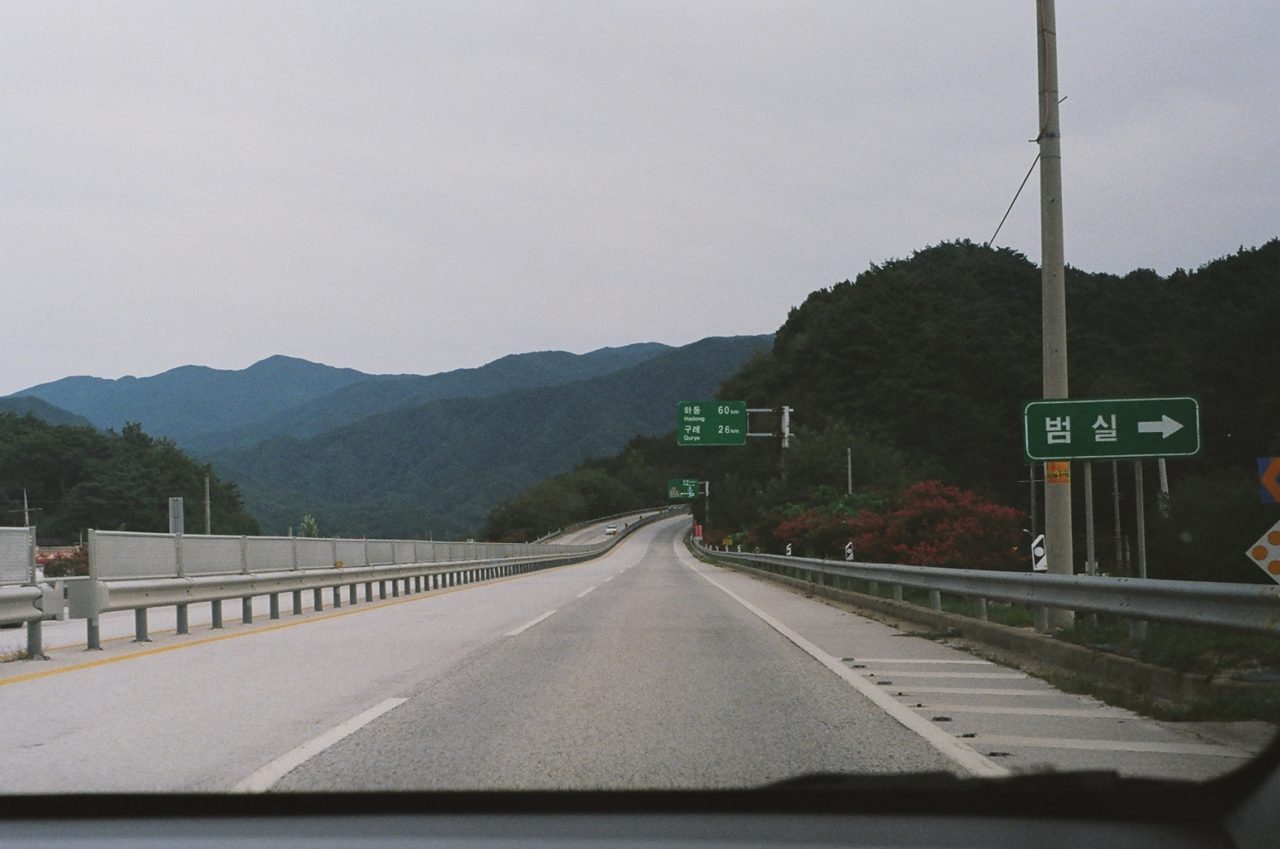 Driving out of Jeonju

We had arrived on the Korean Holiday Chuseok, so the city was bustling with energy especially as we ventured into the traditional Hanok Village. Walking through the village, and down the narrow streets between the traditional houses, you get a sense of the city’s past. And a visit to Gyeonggijeon, a shrine to the kings of the Joseon Dynasty, gives some great insights into this period in South Korea’s history. There is the opportunity to try on the Hanbok here, so the grounds were filled with people strolling around in their traditional dress. 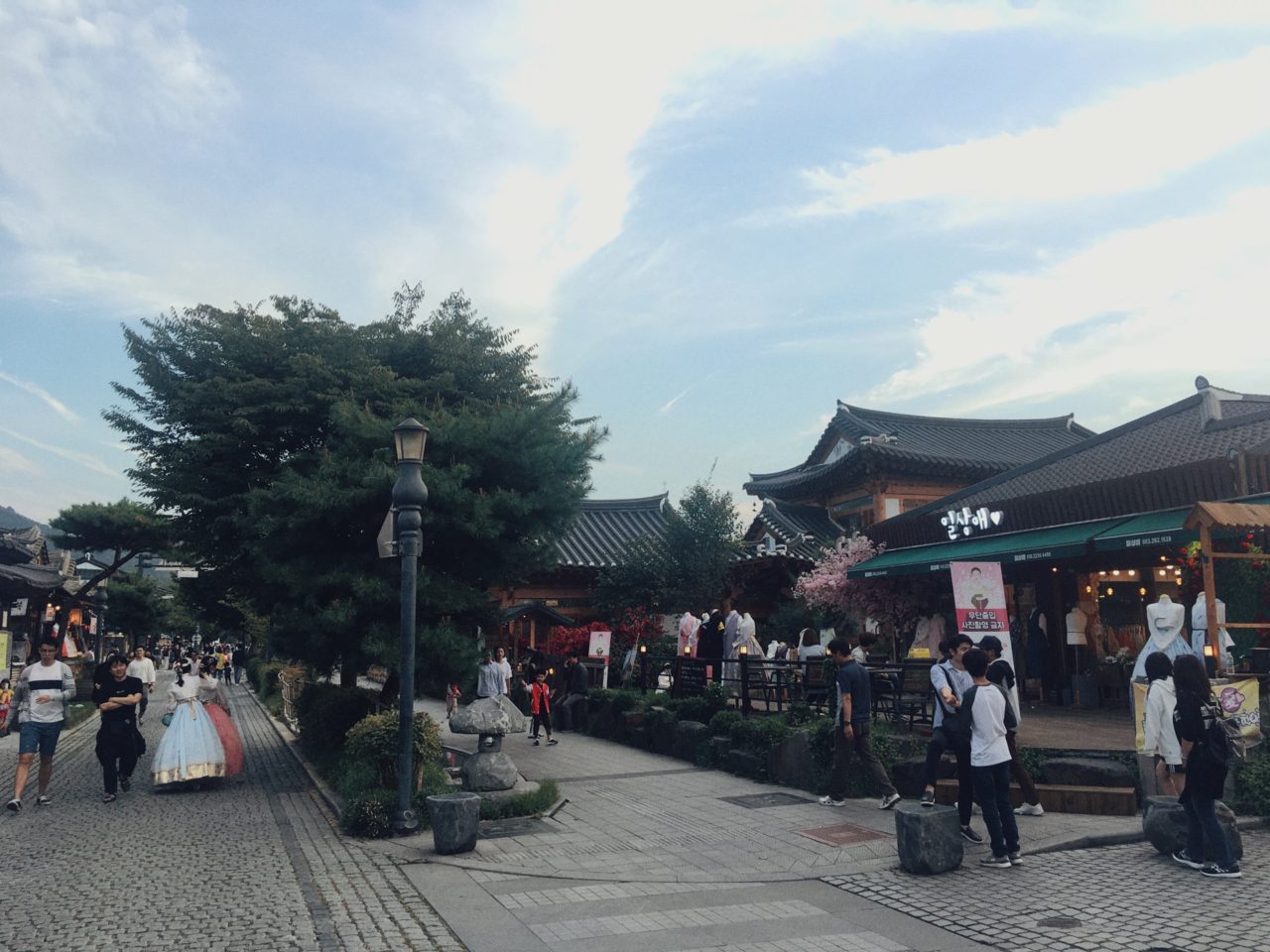 The next day we started our journey east towards Busan, deciding to stay a night in Yeosu. As we made our way out of Jeonju, we got a glimpse of the countryside for the first time as we drove through roads that snaked around the rugged mountains covered in thick green forest, eventually giving way to views of the south coast as we got closer to Yeosu. The festivities of Chuseok seemed to still be ongoing as we arrived later that evening, choosing to spend the evening down by the coast which was packed with people enjoying the Pojangmacha – a food truck with a dining area outside. We were crammed in elbow to elbow along a long row of these Pojangmacha, the festive atmosphere helped by the people lighting fireworks behind us on the river. 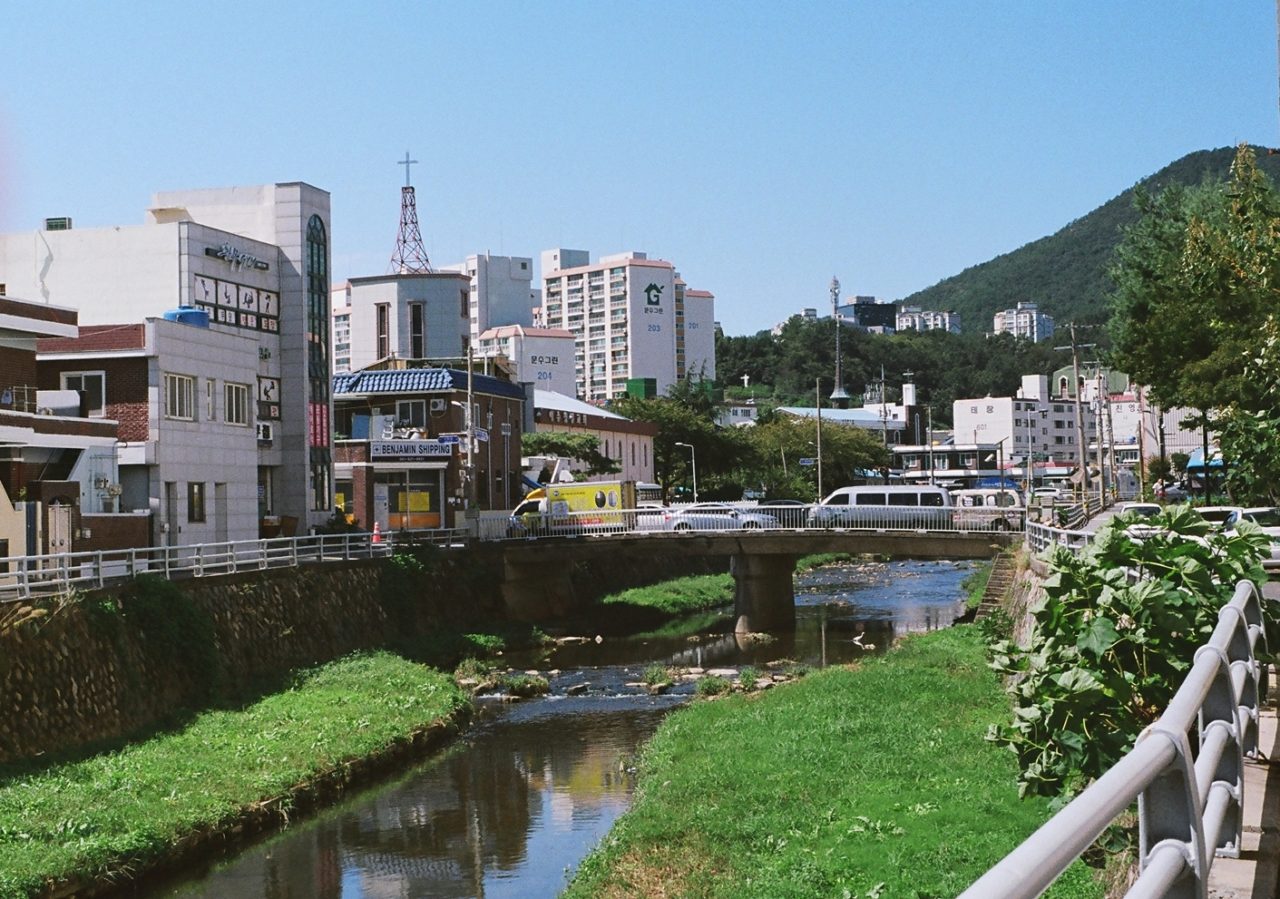 The next day, we made for the port city of Tongyeong. We spent the day wandering about the market, with its abundance of fresh fish brought in from the fishing boats just across the road, and had a stroll through the Dongpirang village situated on a hill overlooking the port. Throughout the village the walls are adorned with murals painted by the locals. They are ever evolving (new murals were being painted when we visited) and the combination of the artwork and the view over the port makes it a nice spot to take a leisurely stroll in the late afternoon. 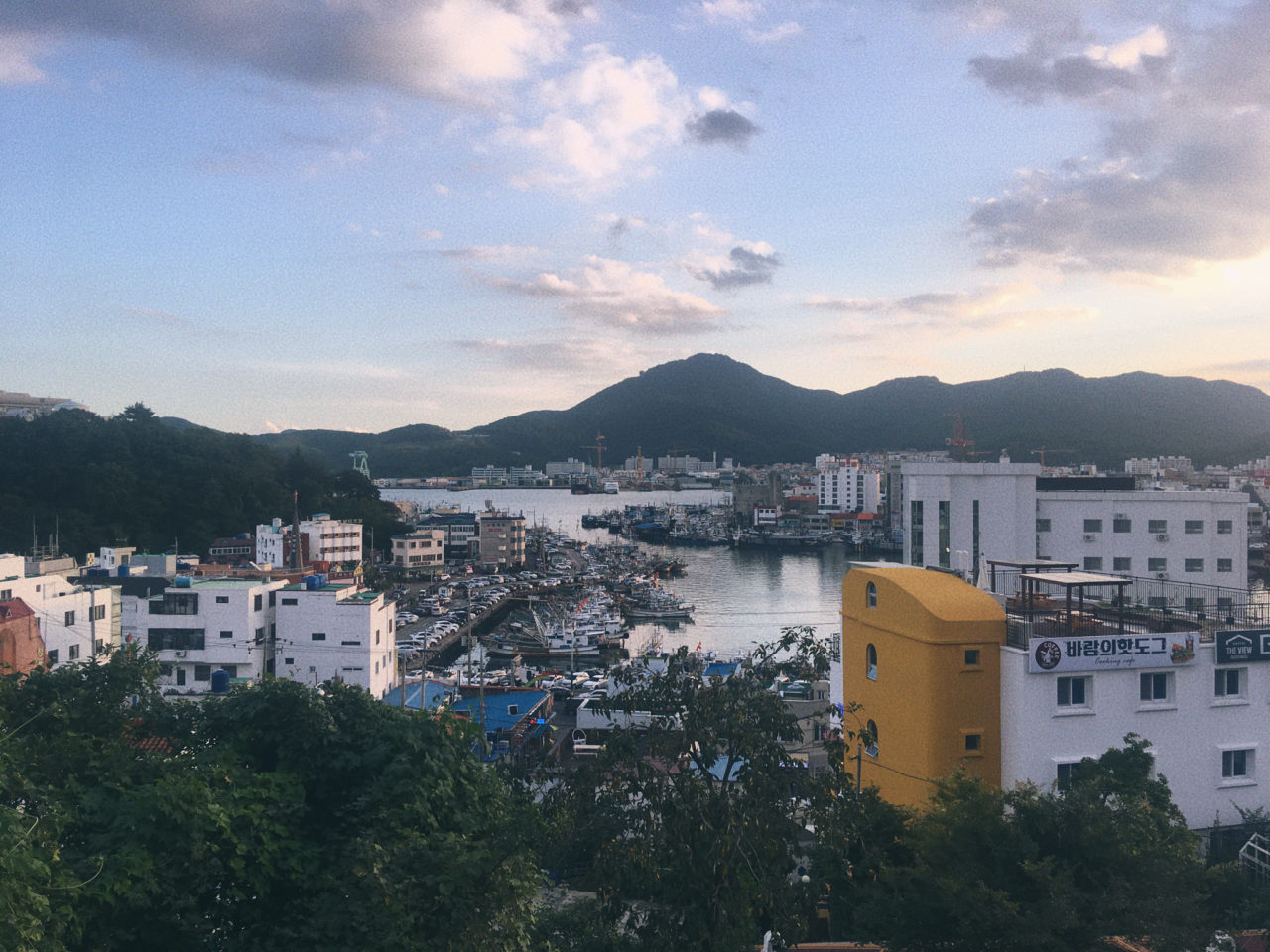 We needed to find a camping spot before the sun set. This turned out to be a bit more difficult than we anticipated – cities not being a natural place to have camping grounds. Nevertheless we found somewhere not too far and settled on the cold, hard ground for the night. Ondol (underfloor heating) was missed! 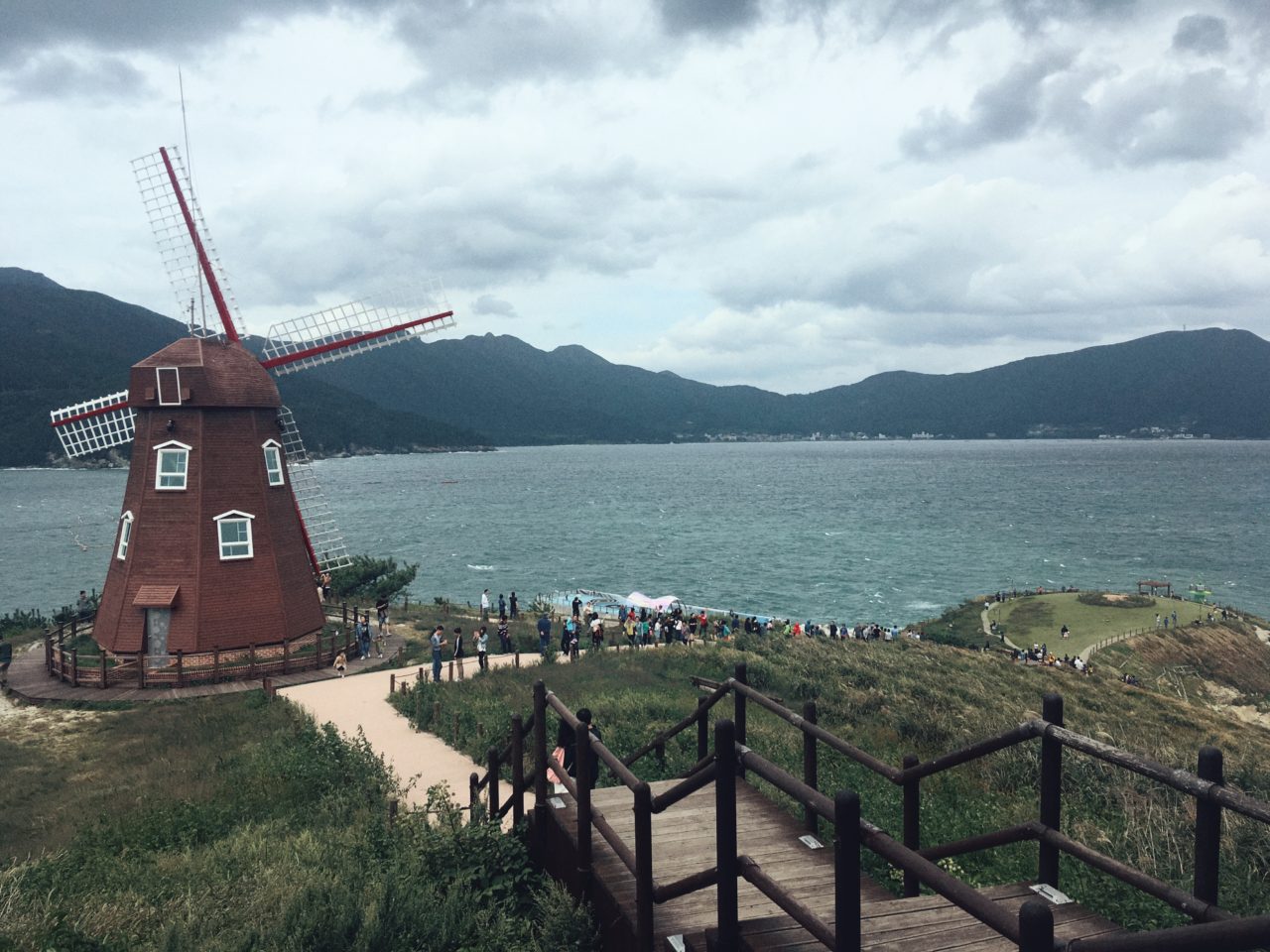 After spending a night in the tent, we arose early to find some breakfast and crossed over east into Geoje Island. We figured we could slow down a bit as we’d driven a lot since leaving Jeonju, so we casually made our way across the island throughout the day. We spent some time at the Windy Hill which, as the name suggests, is very windy, but quite picturesque with a Dutch-style windmill sat atop the hill. We found a nice place to stay by the beach on the east side of the island, so headed there to spend the evening. The next day we headed out of Geoje, stopping at the Geoje Shipbuilding Marine Cultural Center to absorb some maritime culture before reaching Busan, where we decided to spend a couple of nights. 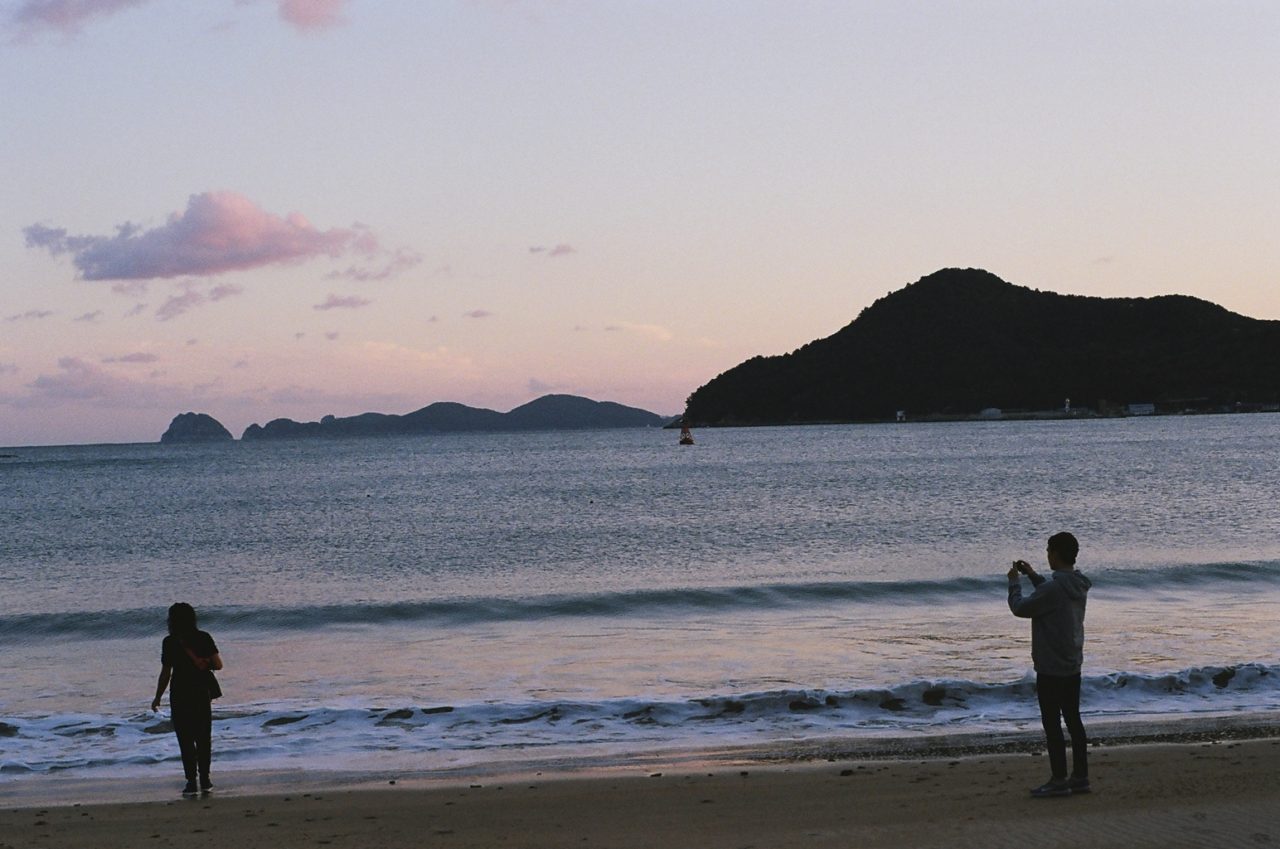